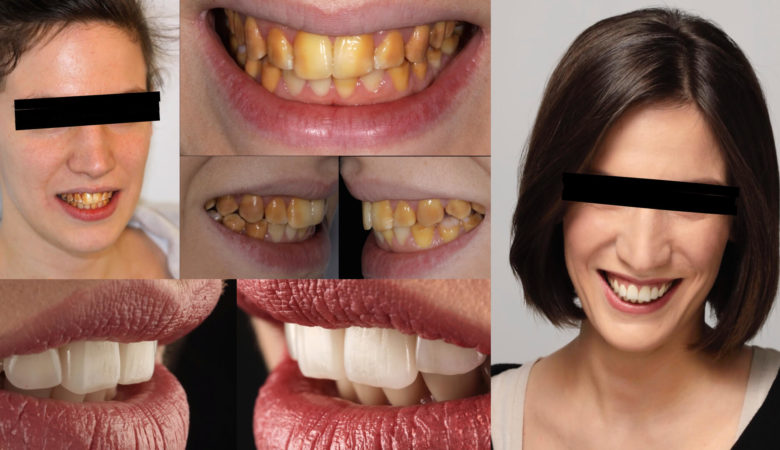 A young female patient was referred with a diffuse Amelogenesis Imperfecta, affecting almost all the permanent teeth The occlusal function showed several characteristics typical of a second dental class, and for this reason, the patient underwent an orthodontic treatment in order to achieve an improvement of the overjet–overbite relation, as well as a correct canine guidance.
The esthetic problem of this condition had caused difficulties in the social life of the patient, and for this reason, it was decided to carry out an esthetic prosthetic restoration.
Initially, the patient underwent a crown lengthening of the posterior regions. The aim was to obtain an adequate tooth coronal height in order to carry out the restoration and to expose the healthy enamel of the coronal area to facilitate adhesion. In addition, in the posterior mandibular lingual areas, the presence of altered passive eruption was identified following a 4 mm probing, while in some interproximal superior areas, there were also initial interproximal bone defects. The crown lengthening enabled the elimination of these bone defects, so making it easier to obtain a more long-lasting result.
It was also possible to observe a diffuse abrasion of the occlusal surfaces
In the frontal region, gingivectomies were also performed to align the asymmetries of gingival contours . Once the healing of gingival tissues was obtained, model casts were mounted on the articulator using a facial arc .
The dental laboratory performed diagnostic wax-ups from which silicone keys were made to be used as a guide for the subsequent teeth preparations. Upper and lower posterior teeth were simultaneously prepared to receive monolithic lithium disilicate crowns (IPS E-max; Ivoclar Vivadent)
In particular, two criteria were used to prepare the abutments: the first was to remove only the portion of the enamel that appeared macroscopically altered and the second was to follow the occlusal morphology obtained from the diagnostic wax-up.
All the finishing lines of the teeth preparations were on the enamel. The laboratory developed at the same time the upper and lower monolithic lithium disilicate pressed crowns with different thicknesses, from 0.5 mm on the axial surface to 1–1.5 mm on the occlusal surface.
In the frontal area, feldspathic ceramic veneers were made with an average thickness of 0.5 mm.
The application of the veneers produced a remarkable improvement in the tooth surface passing from a porous and rough surface, due to the altered enamel, to the smooth surface of the ceramic. This change, together with the patient’s motivation, helped to solve the chronic marginal gingivitis already present before the beginning of the prosthetic treatment with the restoration of a normal gum appearance. 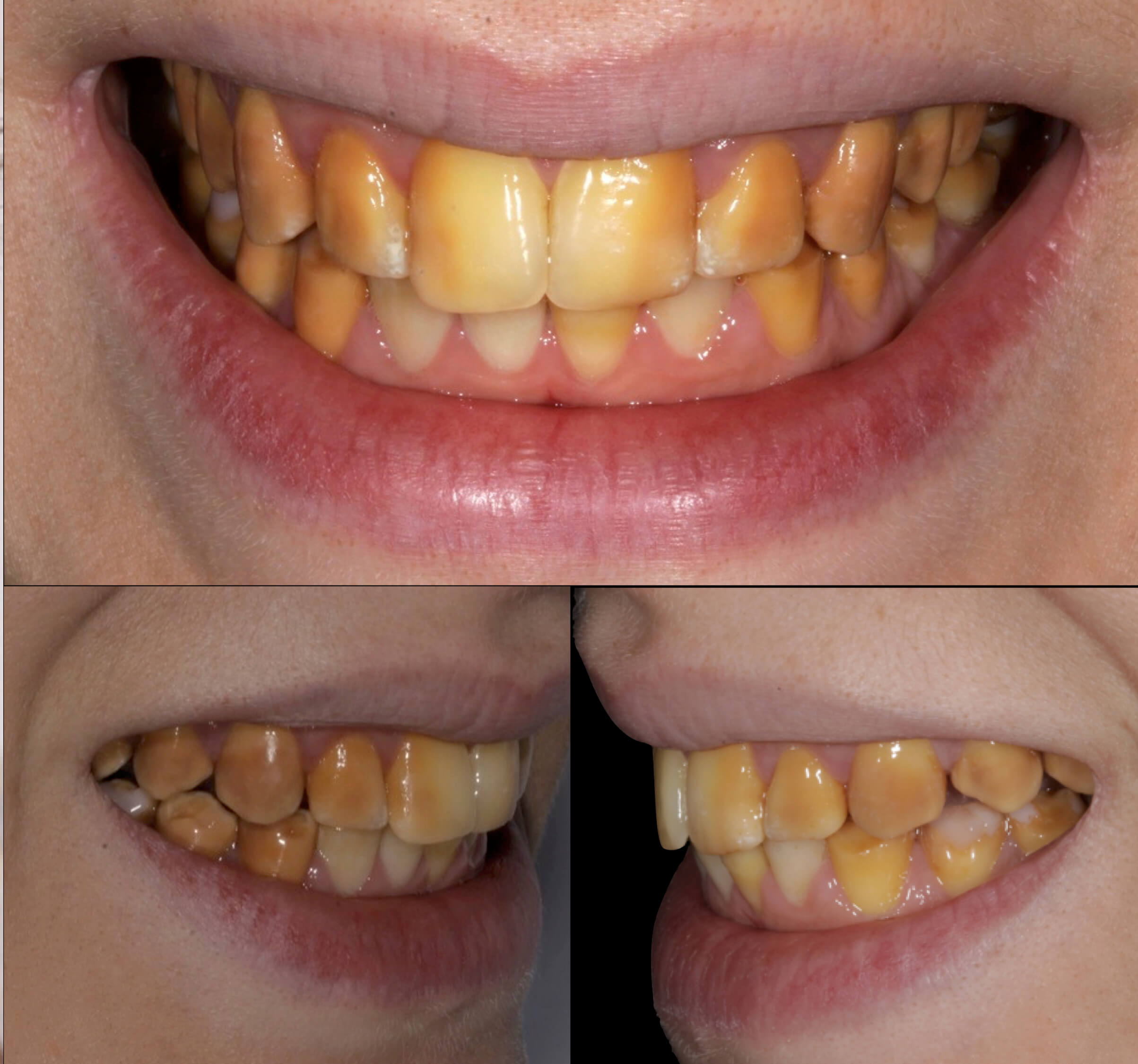 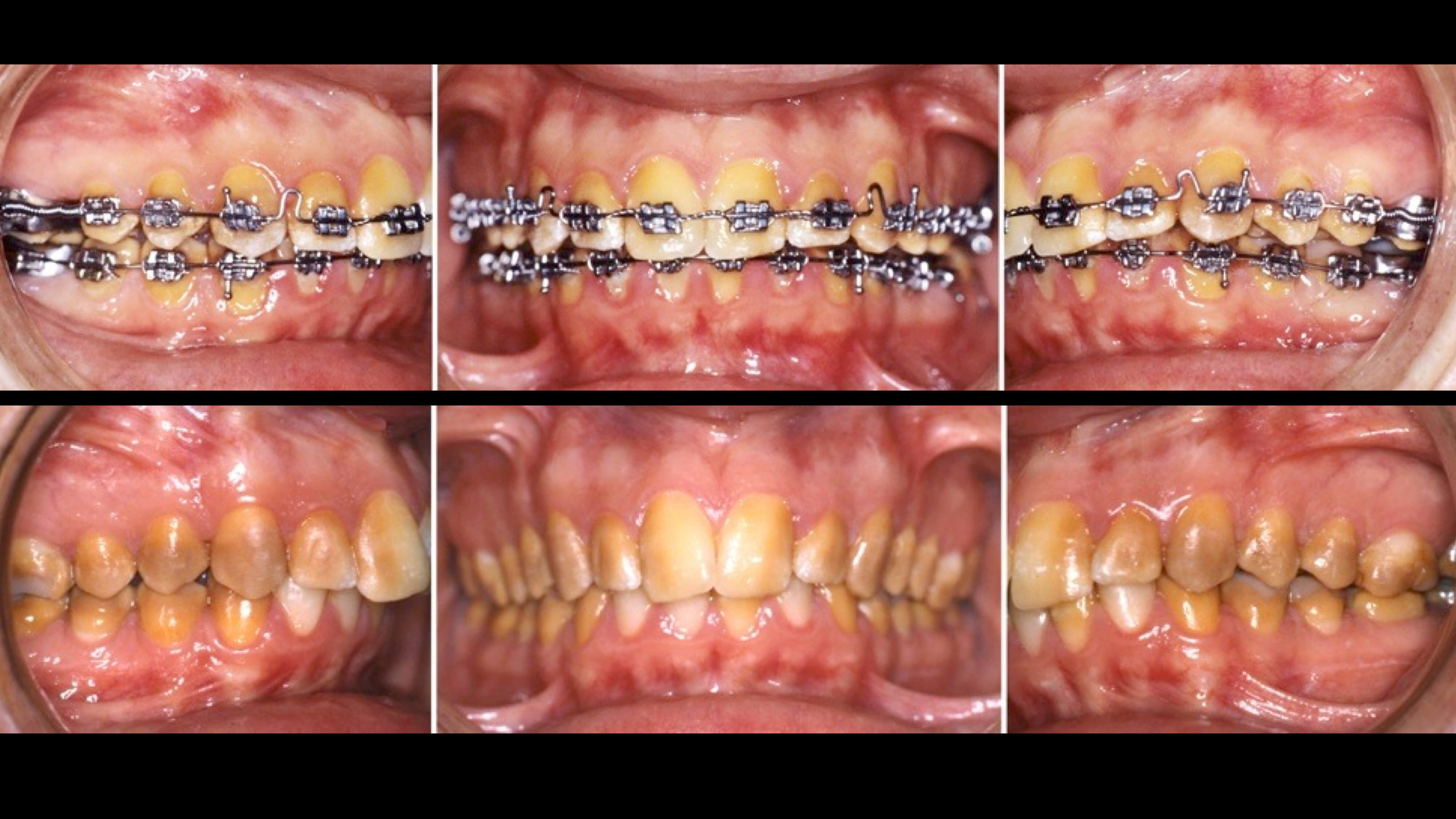 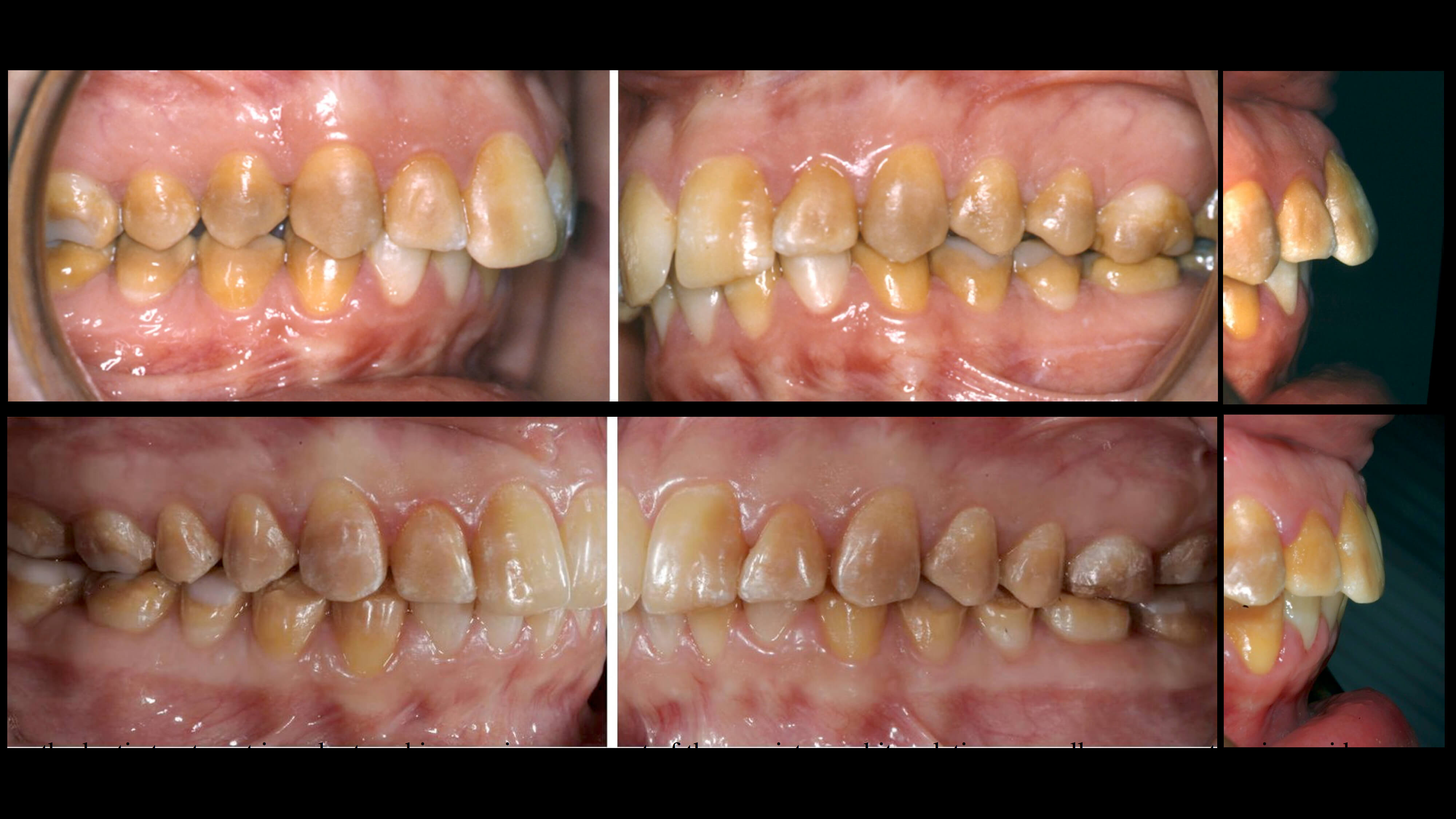 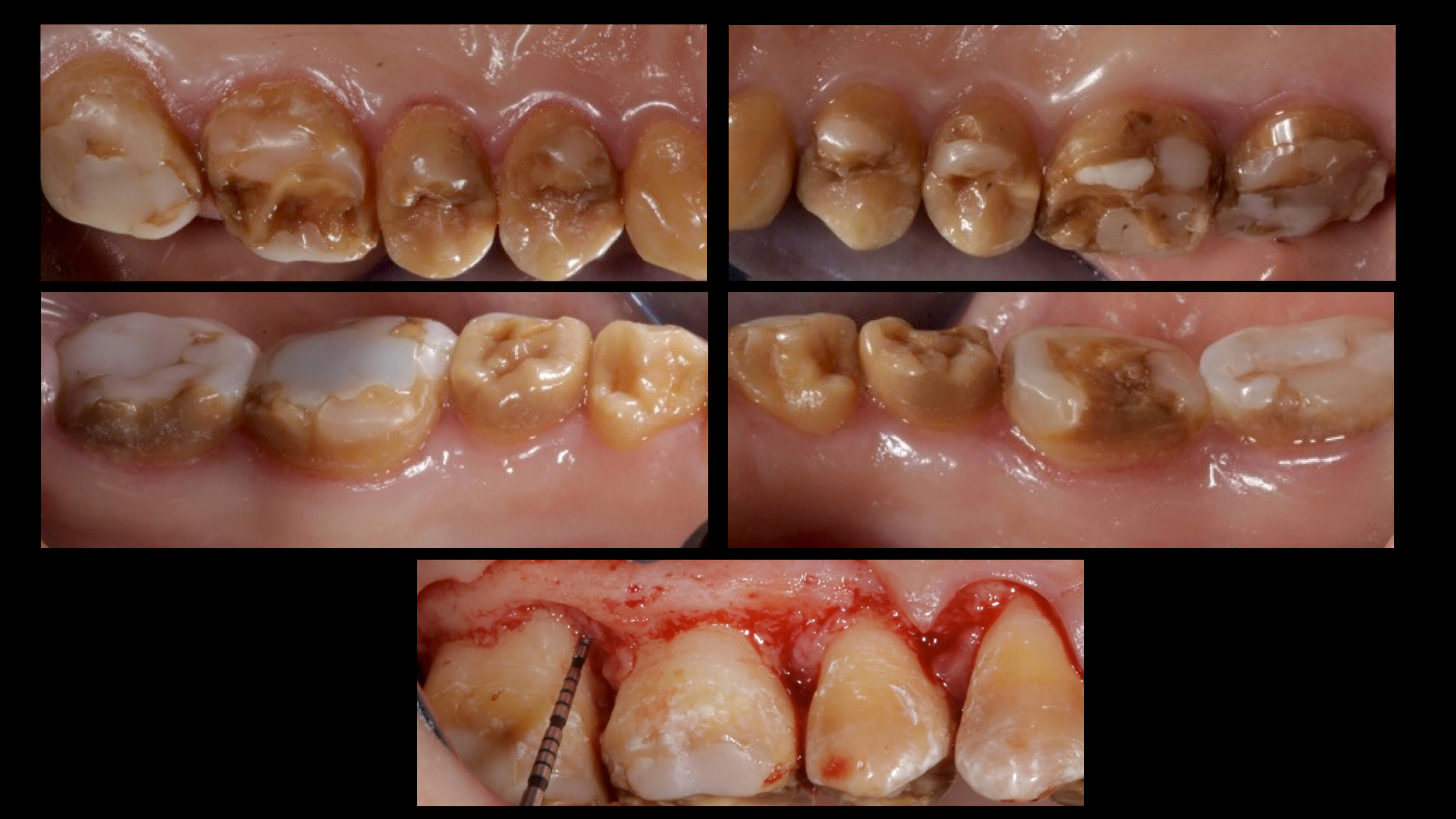 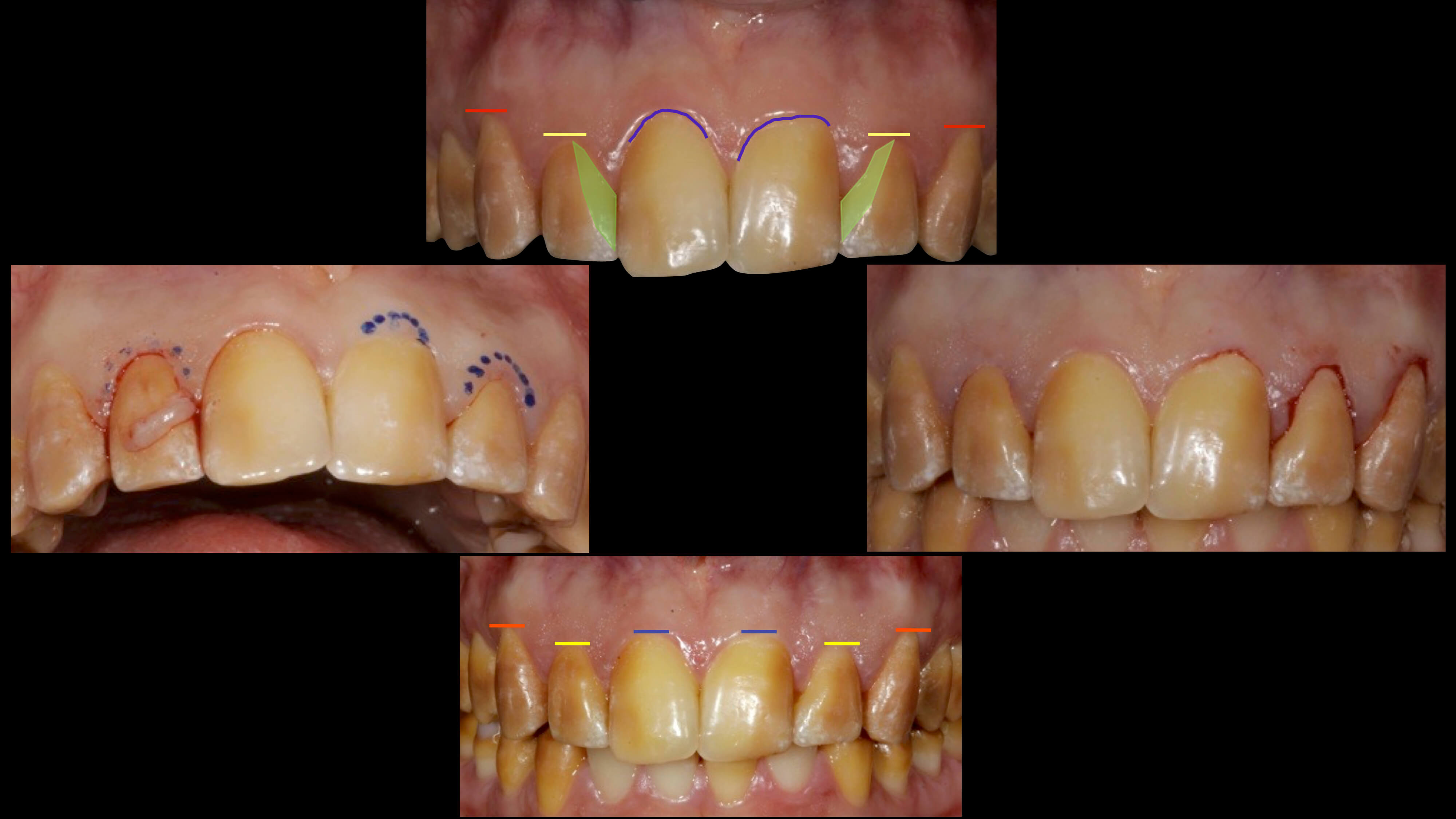 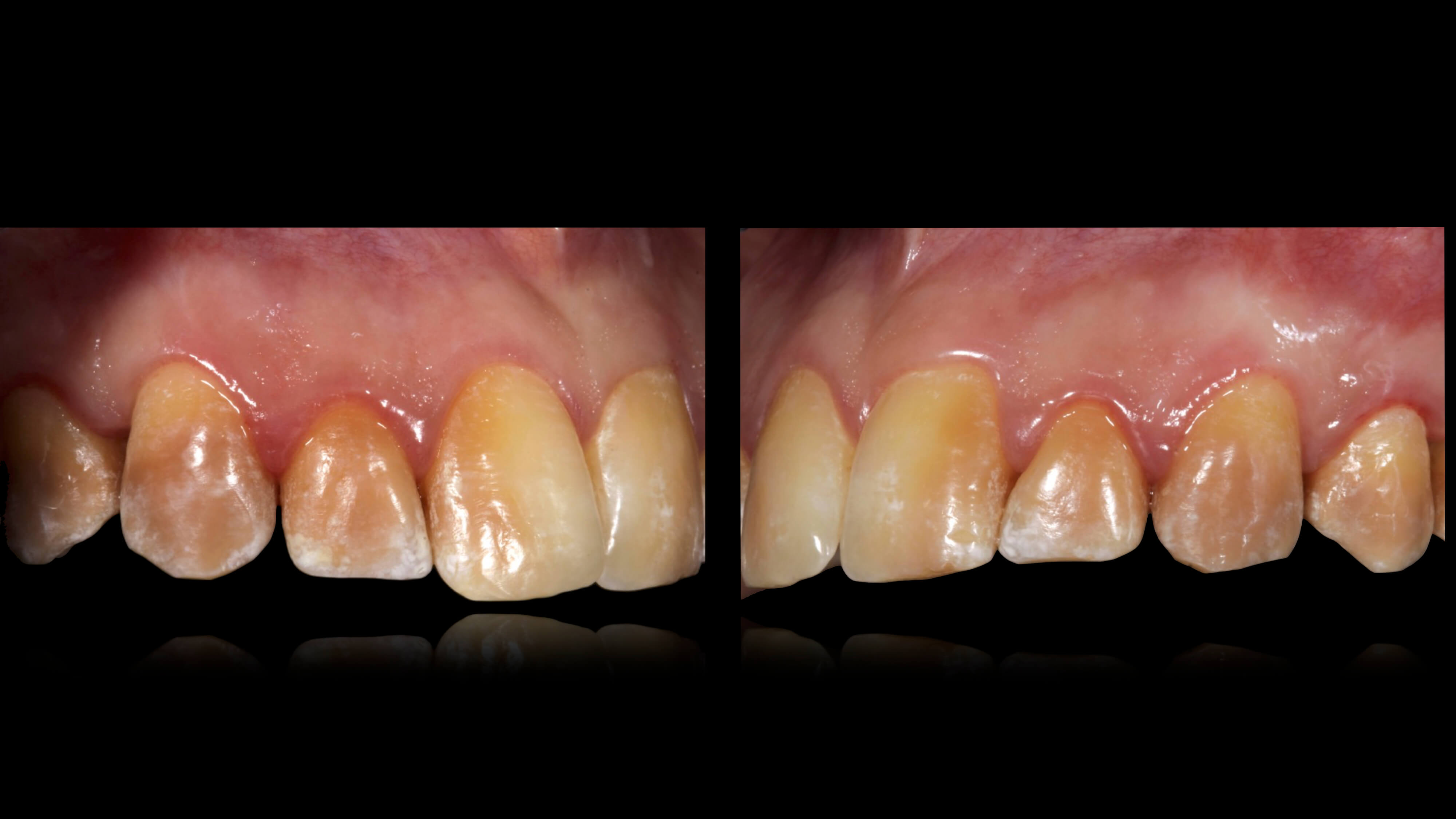 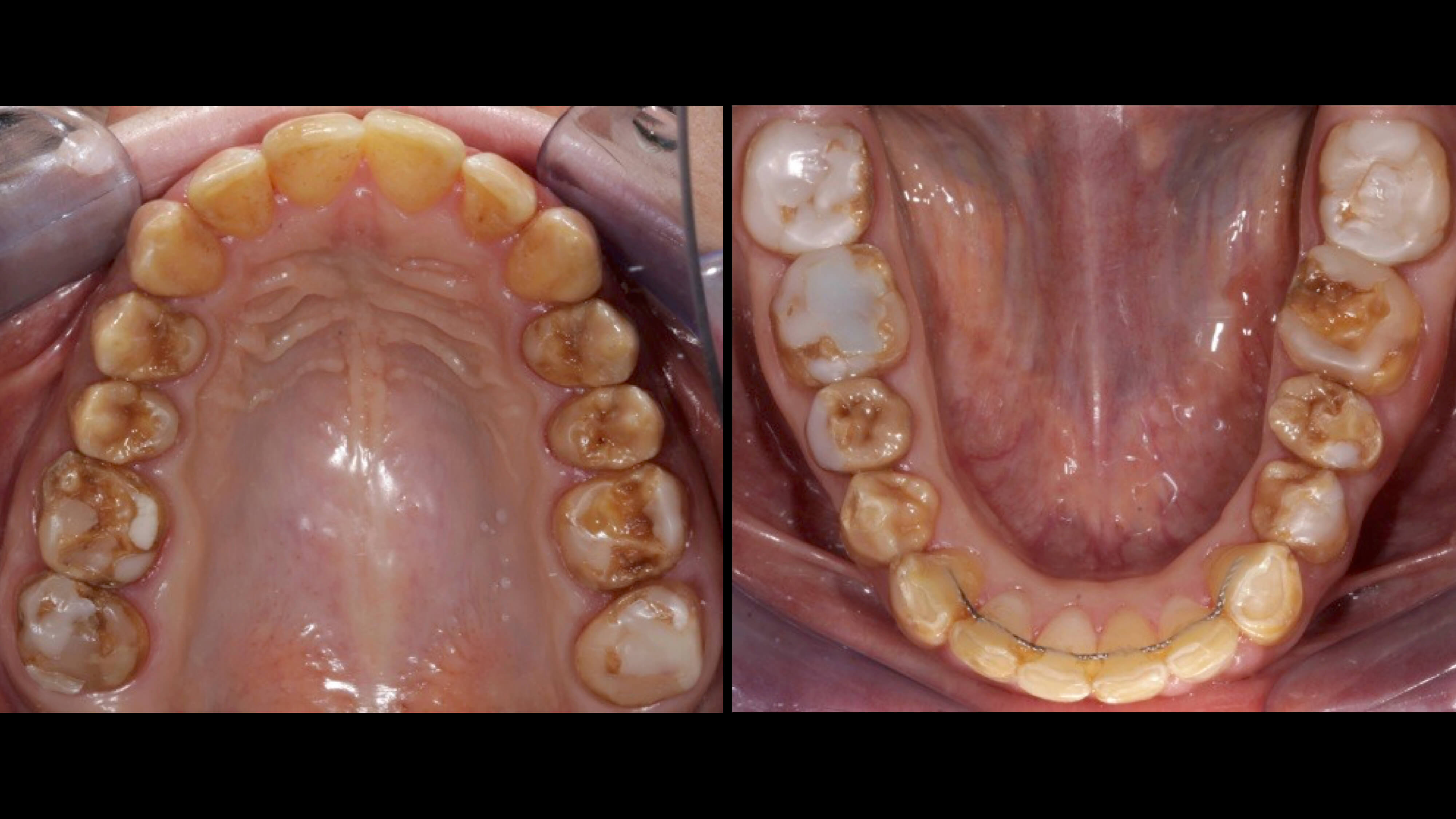 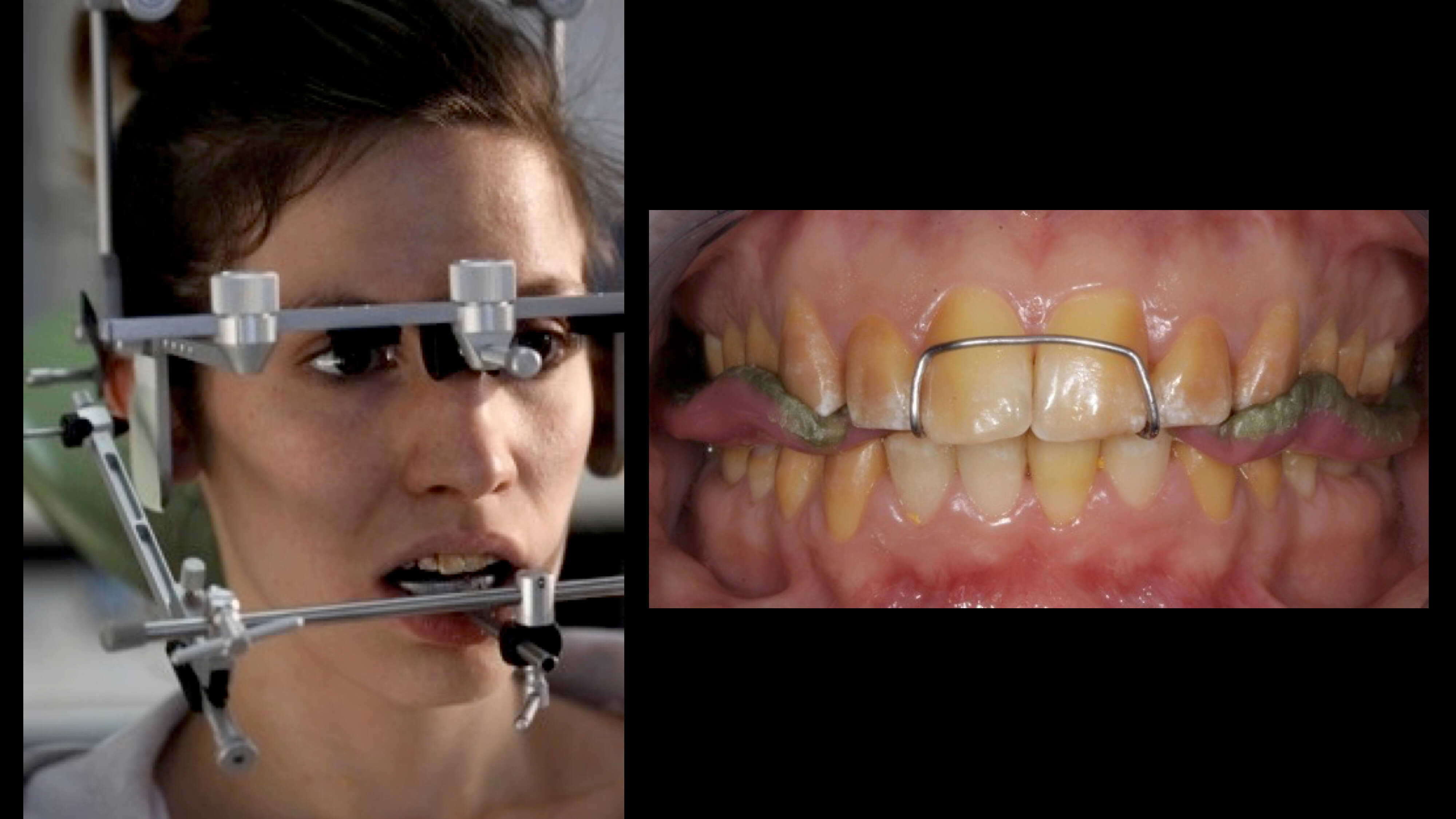 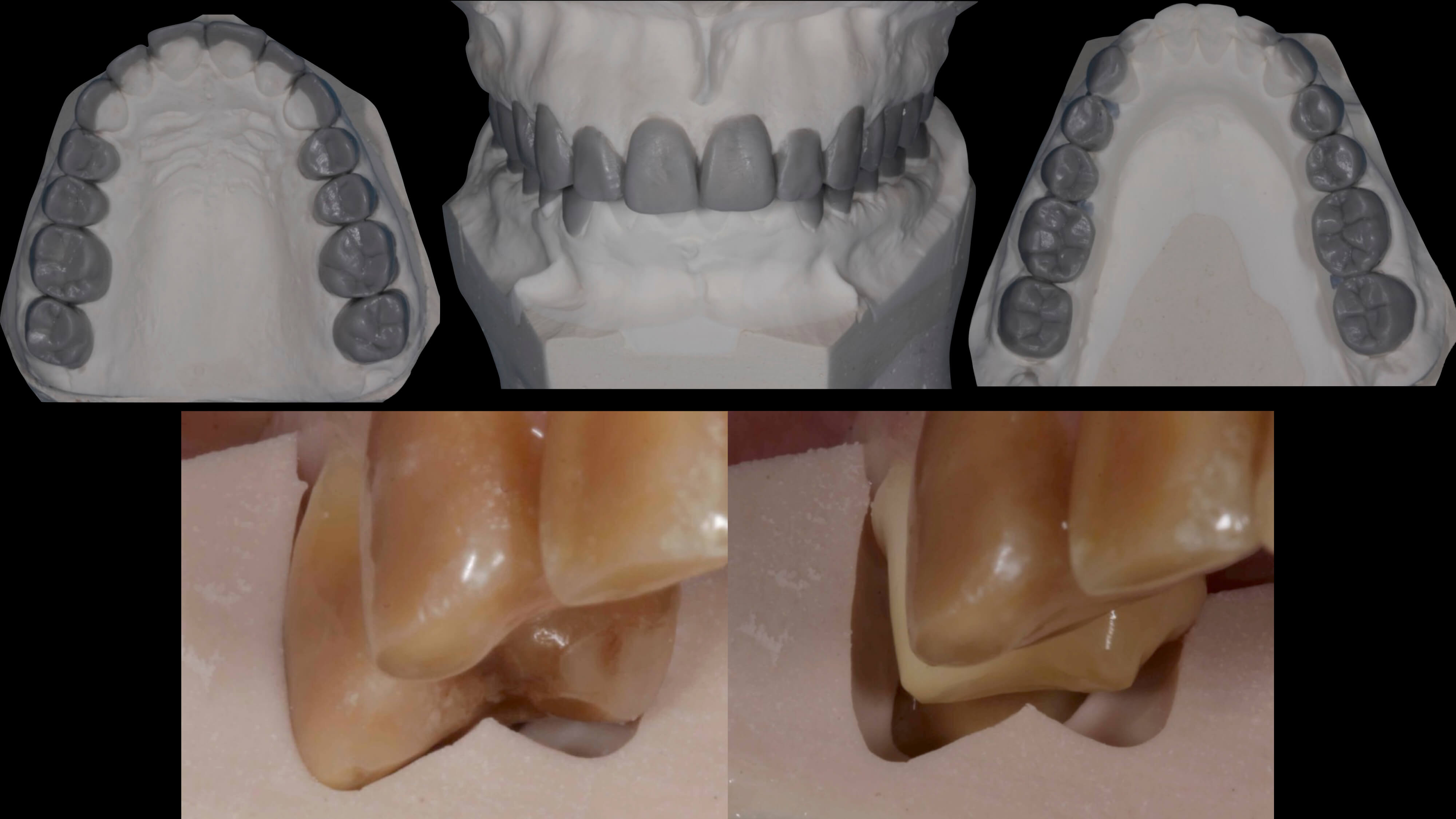 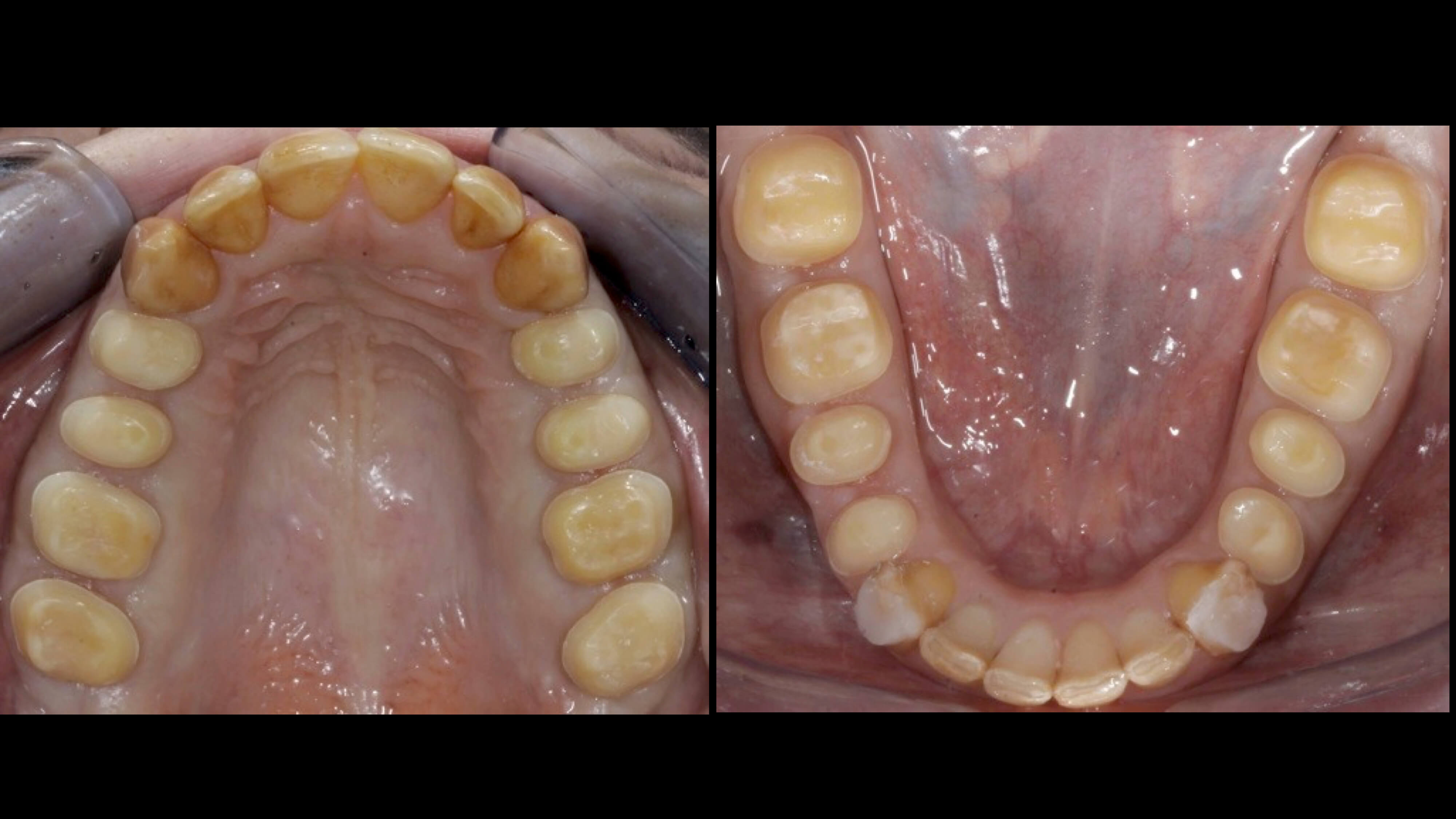 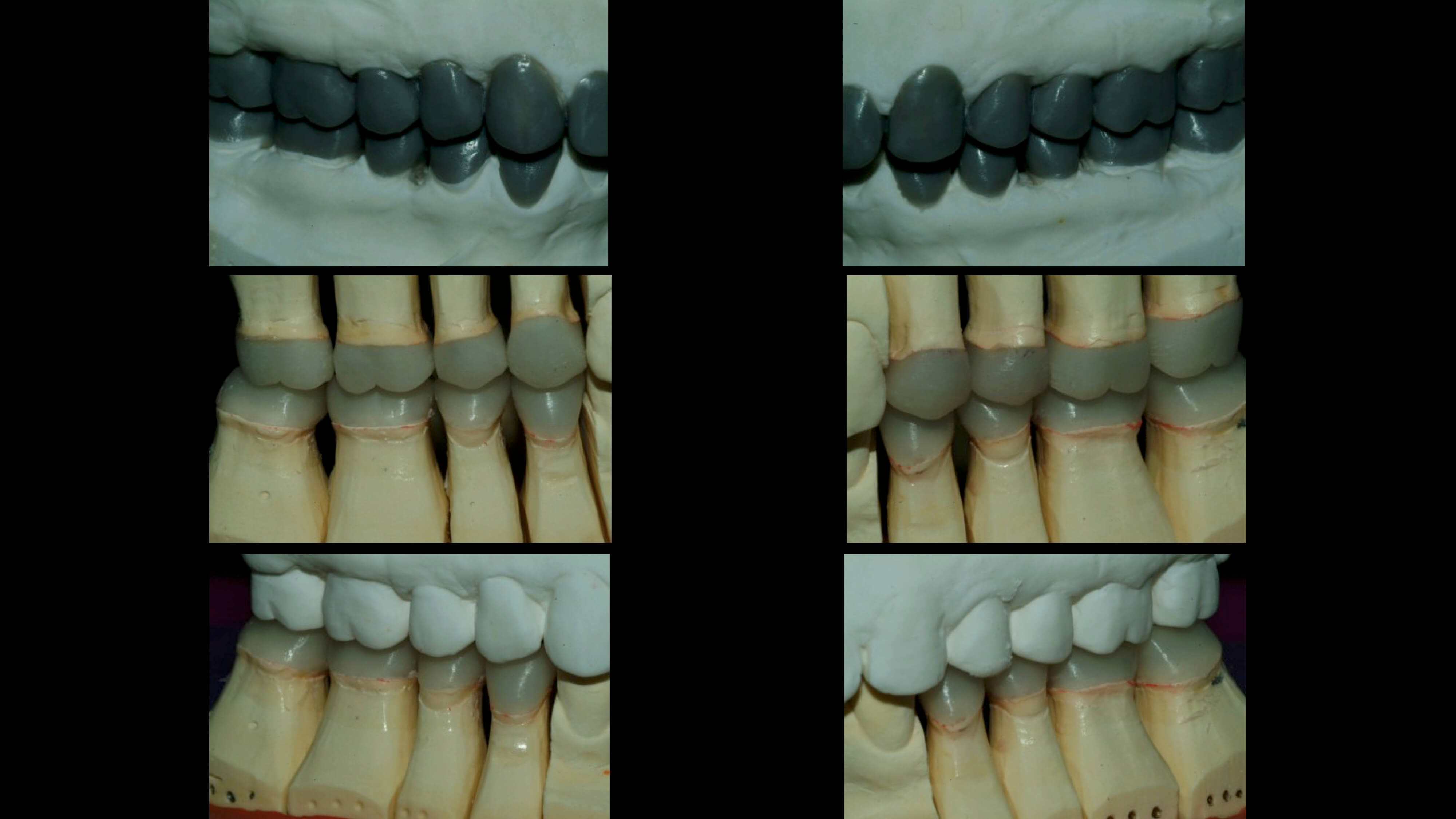 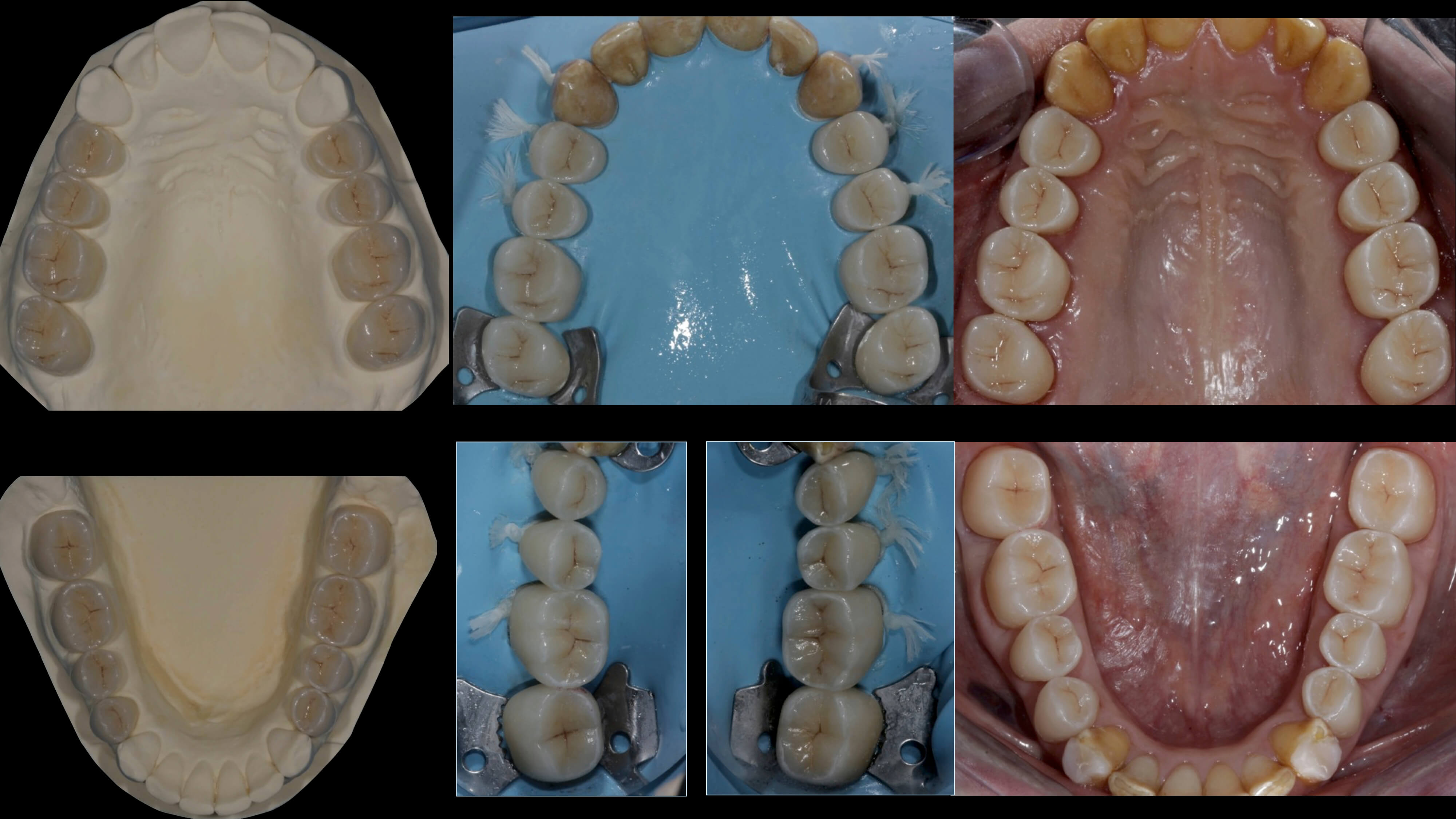 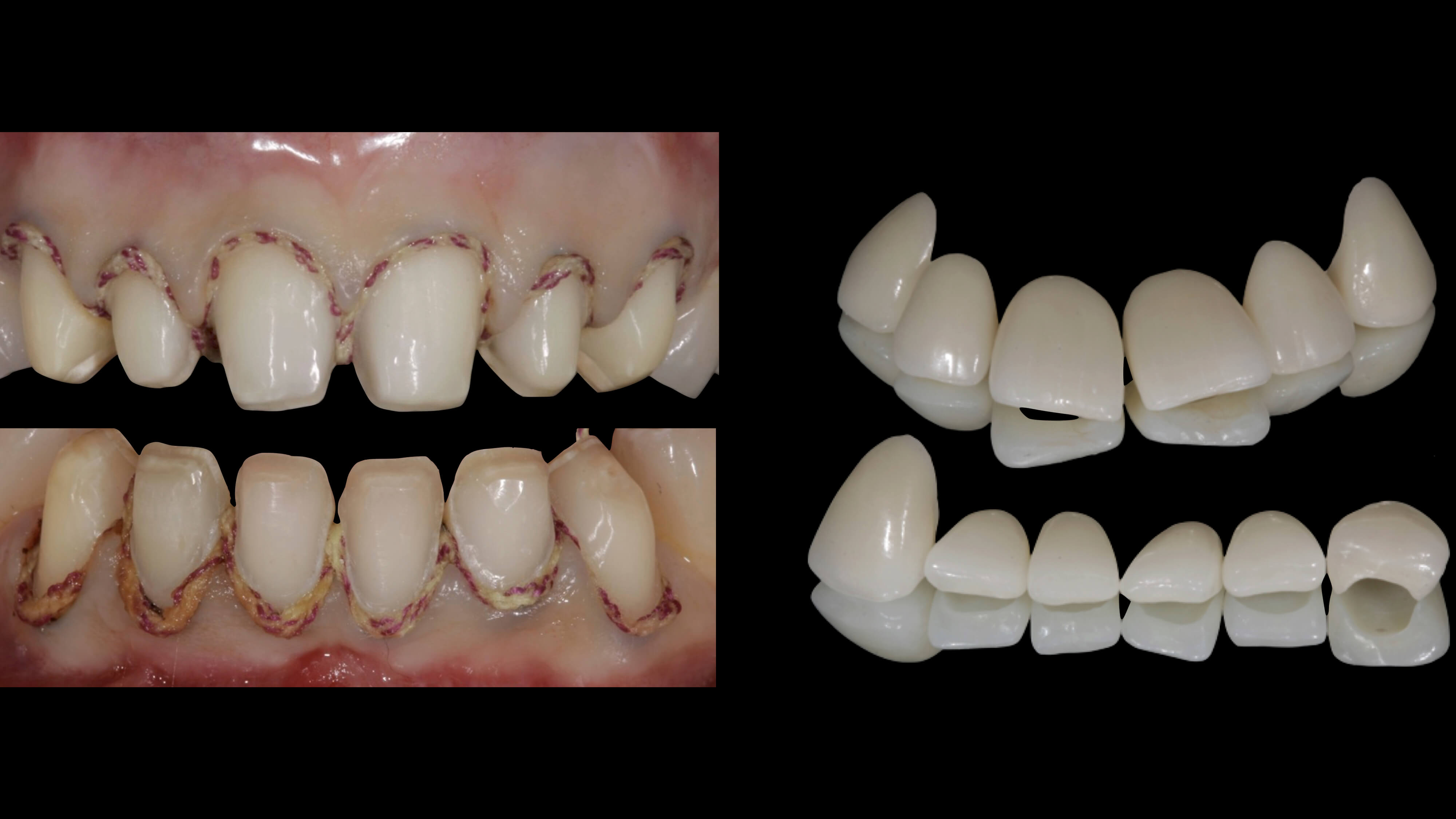 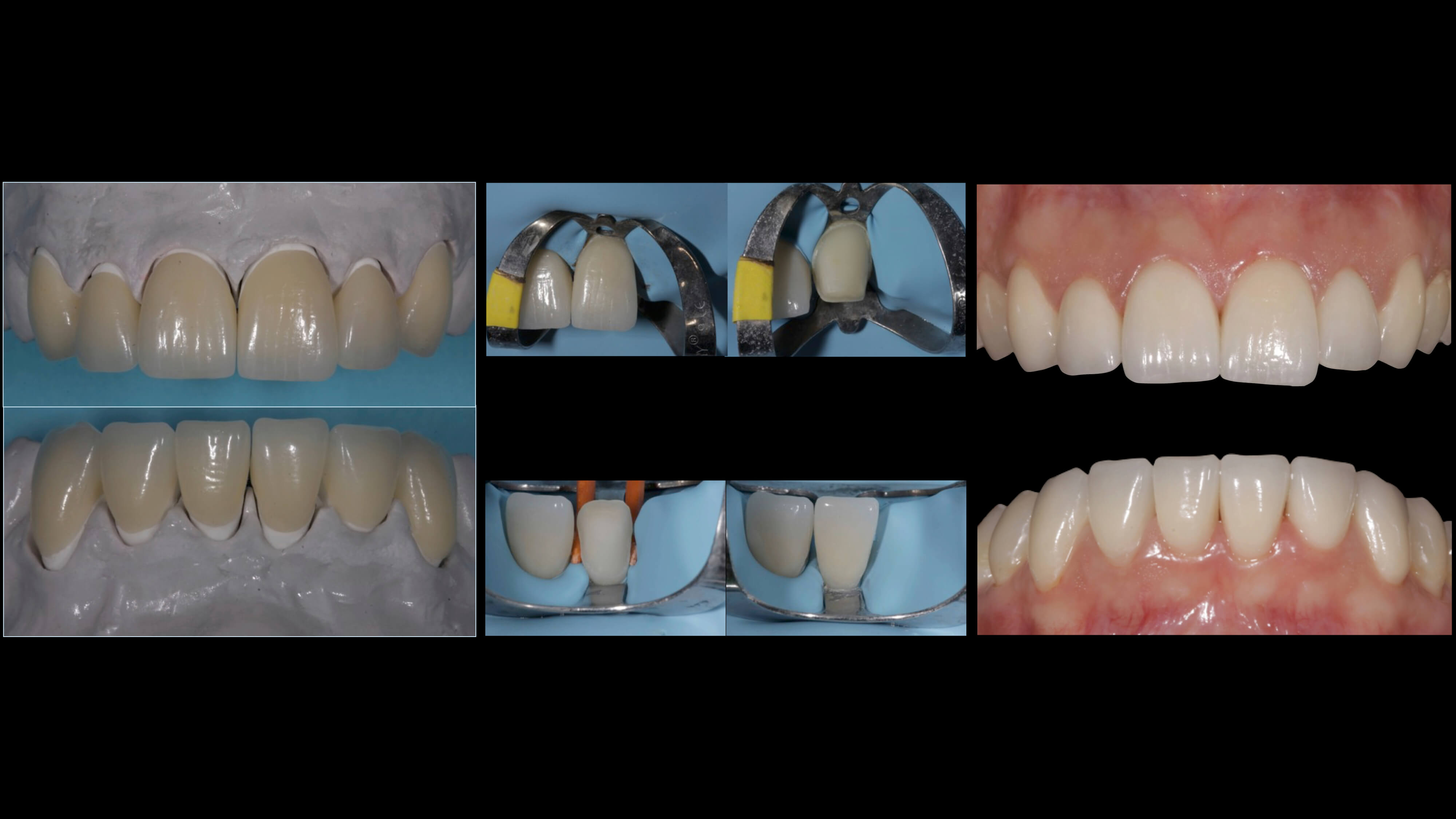 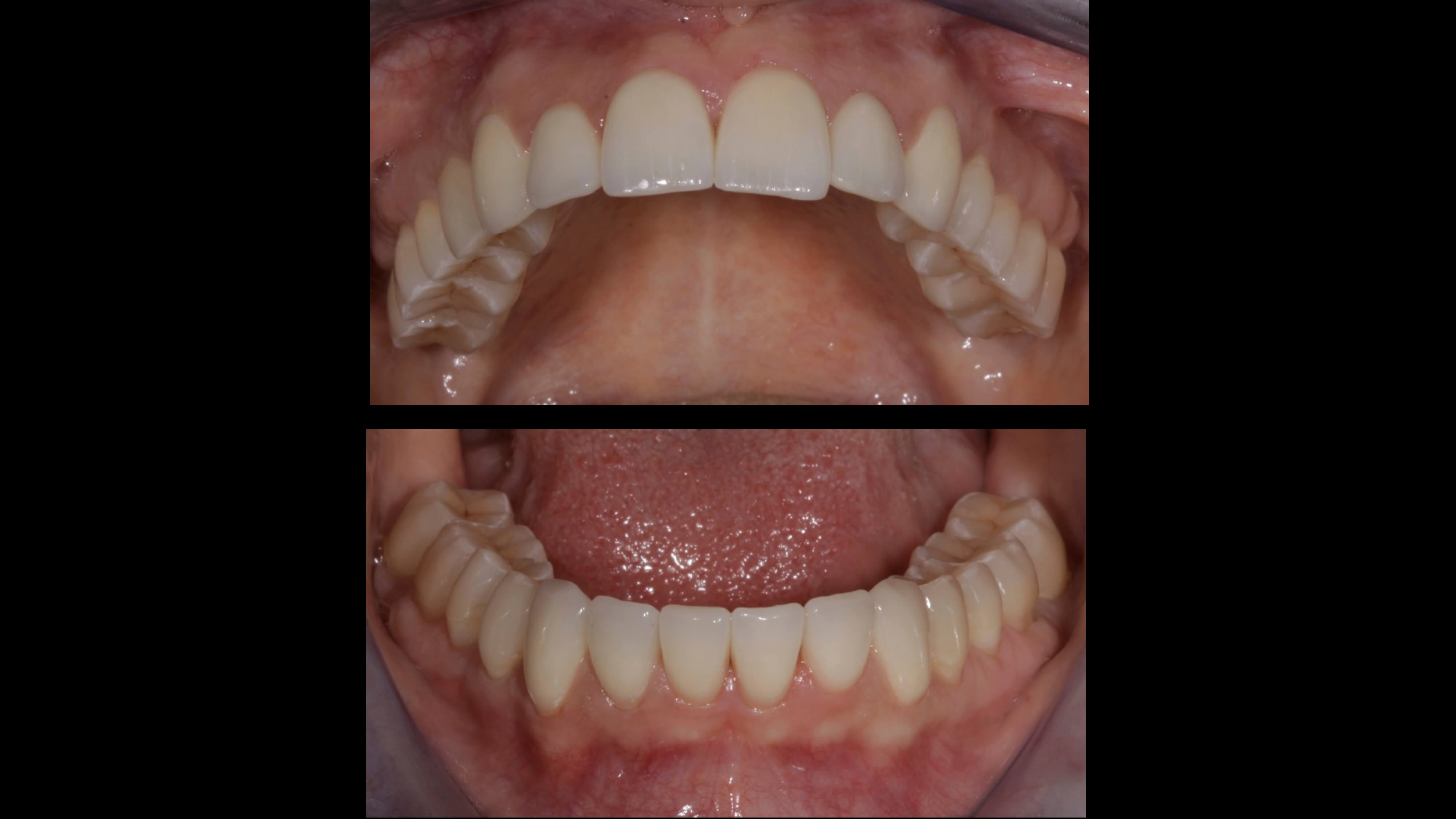 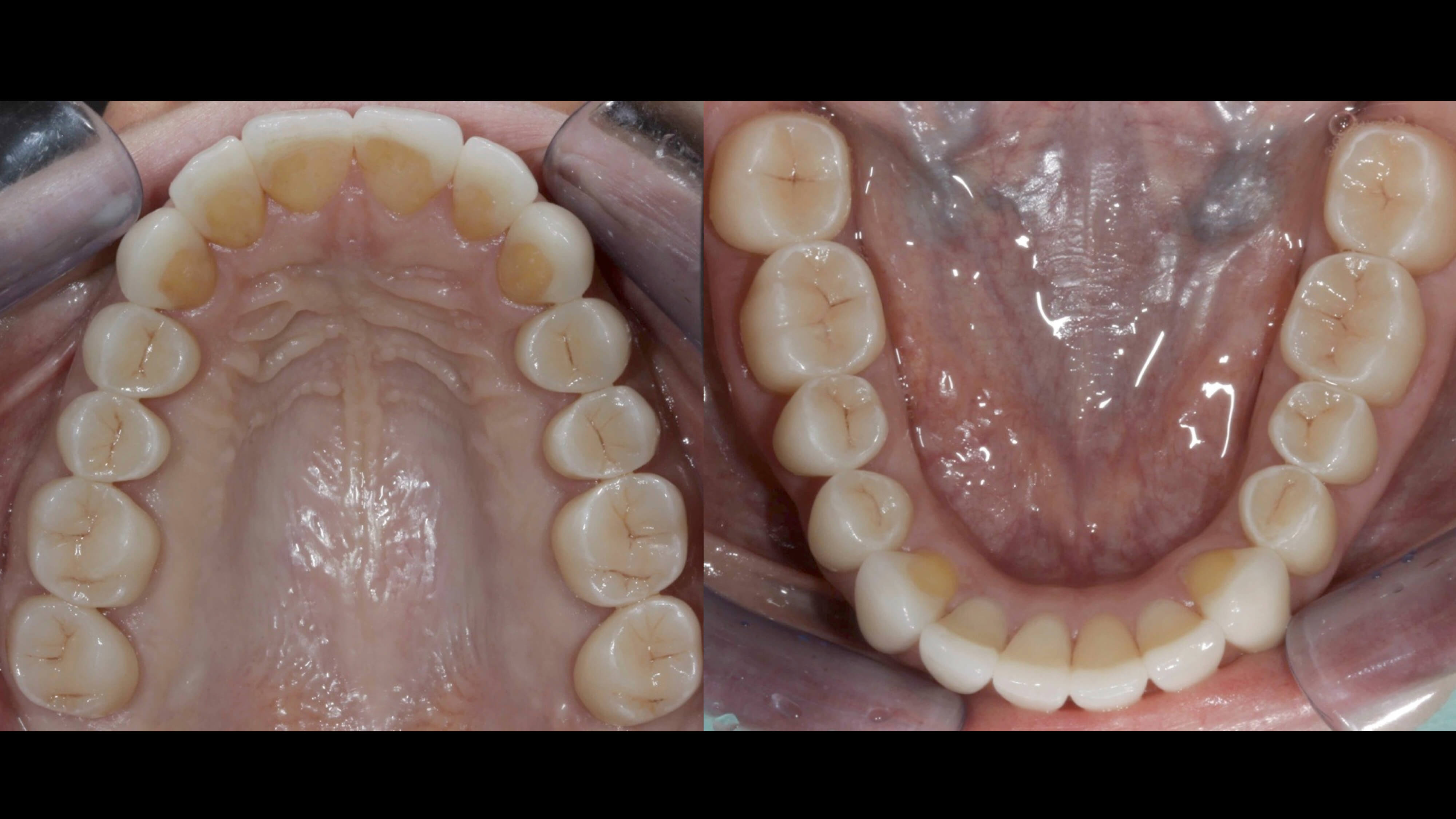 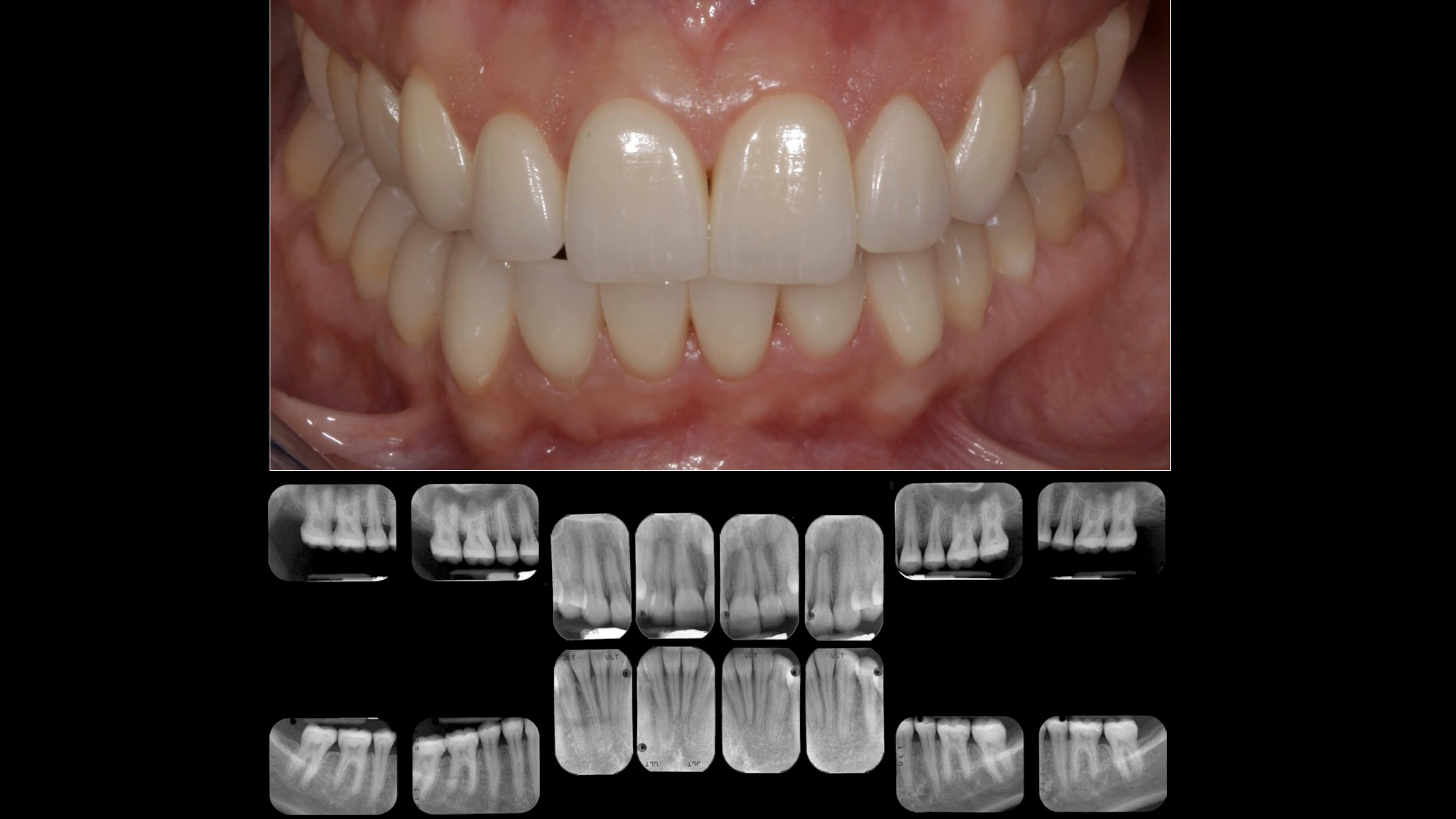 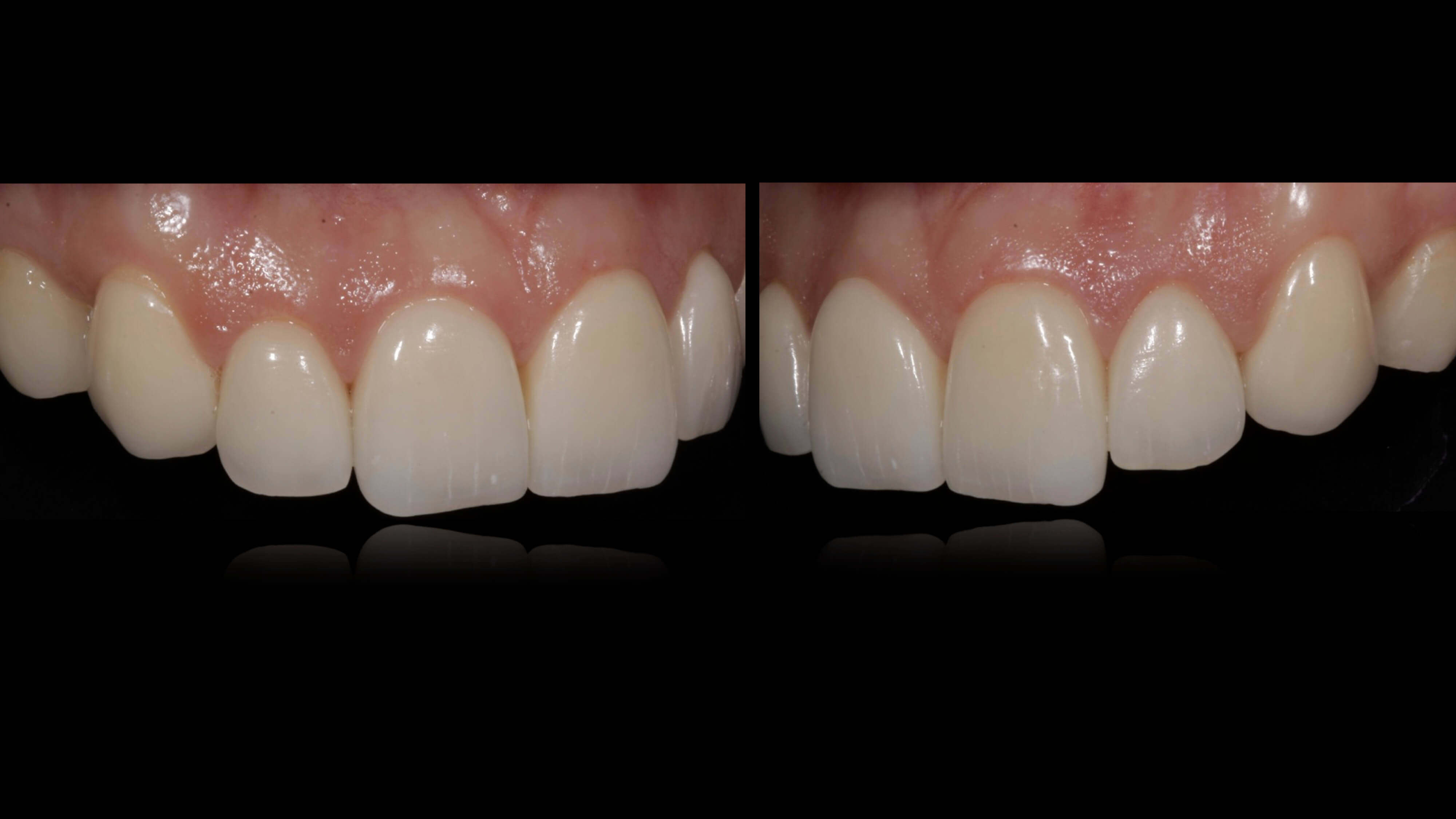 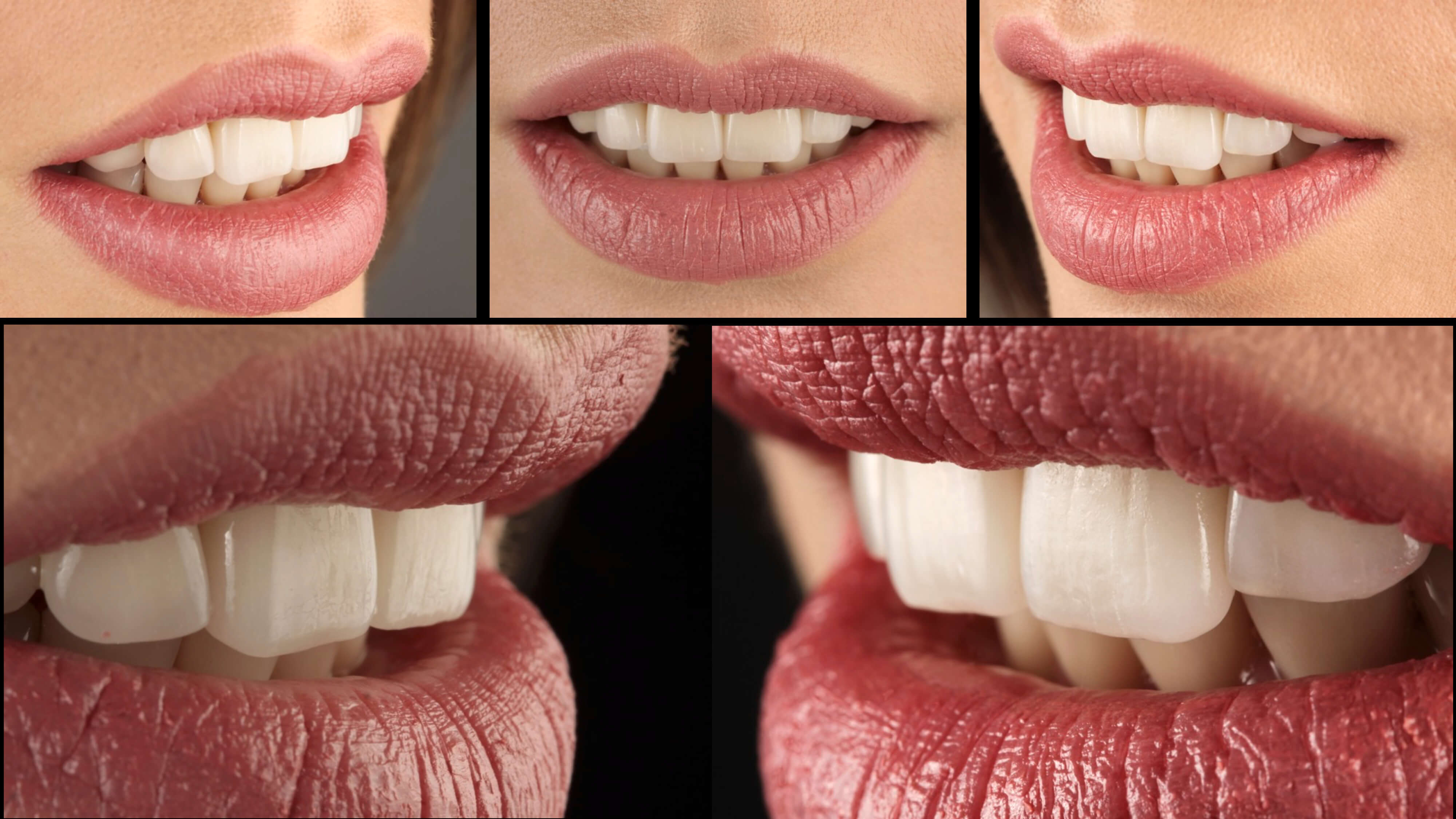 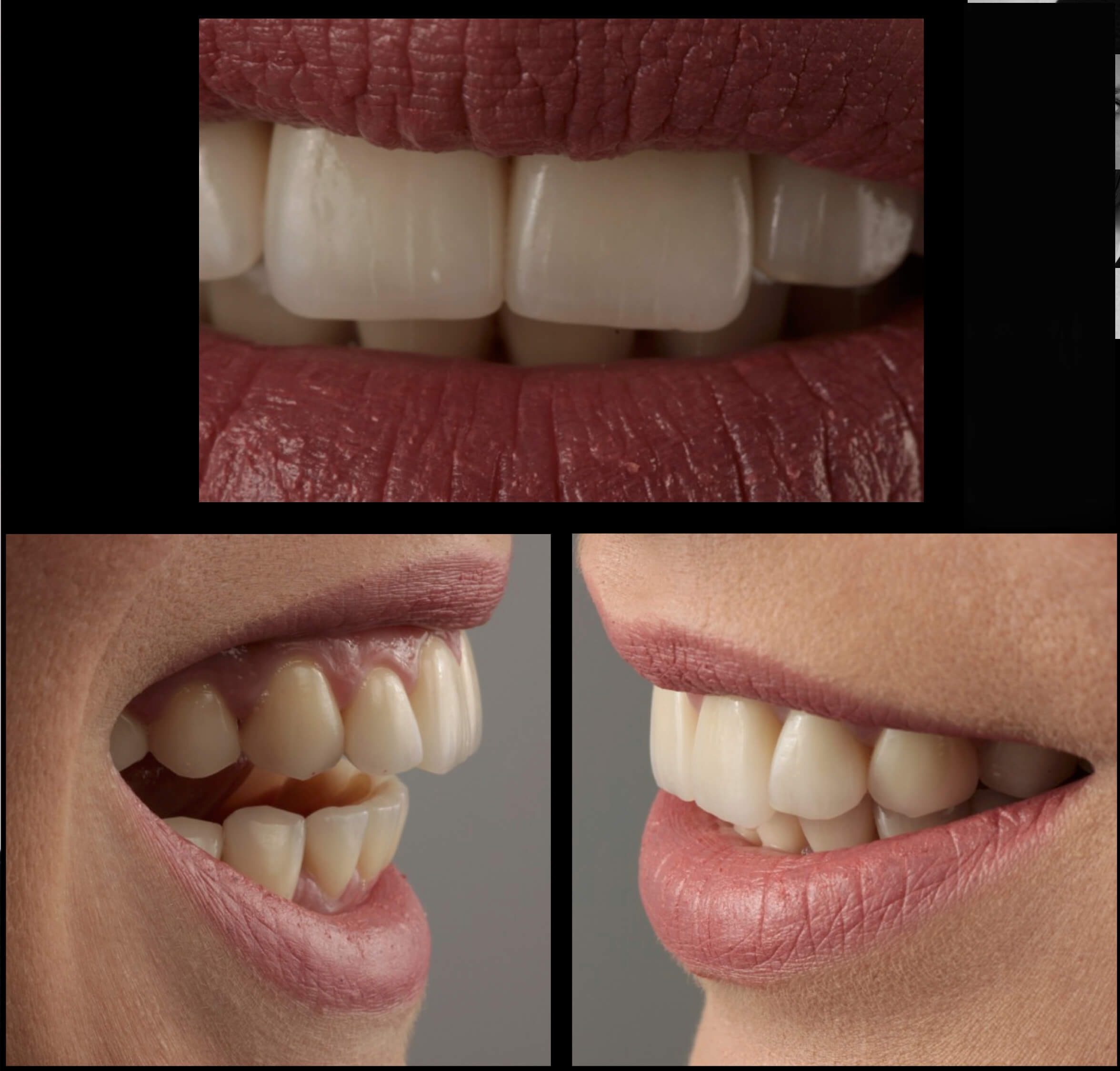 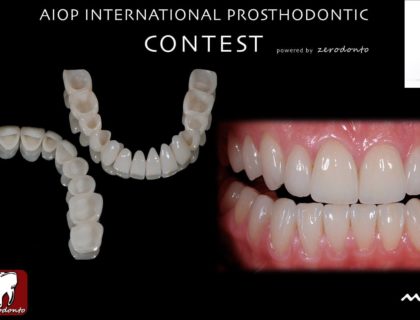 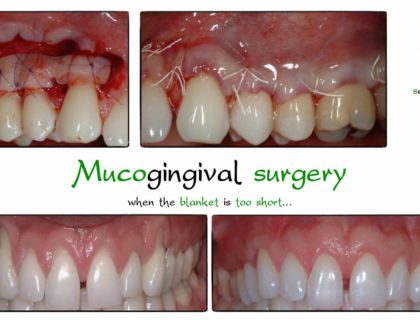 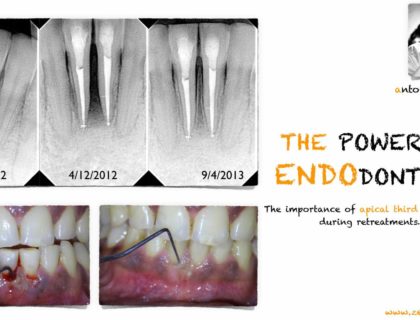