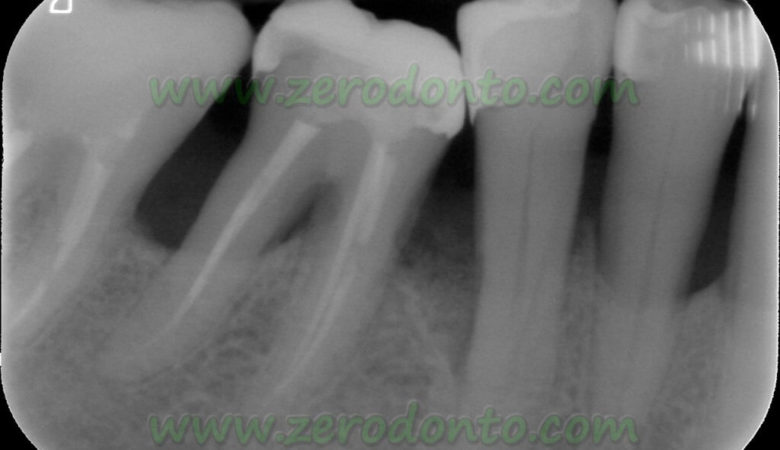 In the last decade, a growing interest for more friendly, patient oriented surgery have urged clinical investigators to focus their interest in the development of less invasive approaches. Surgical procedures in medicine and in dentistry have undergone radical changes to reduce invasivity; in parallel novel instruments and materials have been developed for the inevitable evolution of the surgical armamentarium (Cortellini 2012).

The field of periodontal surgery have been enriched with this peculiar and innovative approach rather recently (Harrel and Rees 1995). They proposed the “Minimally Invasive Surgery (MIS)” with the aim to produce minimal wounds, minimal flap reflection and gentle handling of the soft and hard tissues (Harrel and Nunn 2001, Harrel et al. 2005). Cortellini and Tonetti (2007a) proposed the Minimally Invasive Surgical Technique (MIST) to stress the aspects of wound and blood clot stability and primary wound closure for blood-clot protection. These concepts were further enforced with the Modified Minimally Invasive Surgical Technique (M-MIST, Cortellini & Tonetti 2009) that, additionally, incorporated the concept of space provision for regeneration. Minimally invasive surgery is a term that describes the application of very precise and delicate surgical procedures that require the use of magnifying devices, like operating microscopes or magnifying lenses, and microsurgical instruments and materials. Cortellini & Tonetti (2001, 2005) proposed the use of an operative microscope in periodontal regenerative surgery, reporting an increased capacity to manipulate the soft tissues that resulted in an improved potential for primary closure of the wound from an average 70% of the cases obtained with regular surgery to an excellent 92% obtained with microsurgery.

These procedures can be applied for the treatment of shallow and deep intrabony defects (up to the apical third of the root surface). 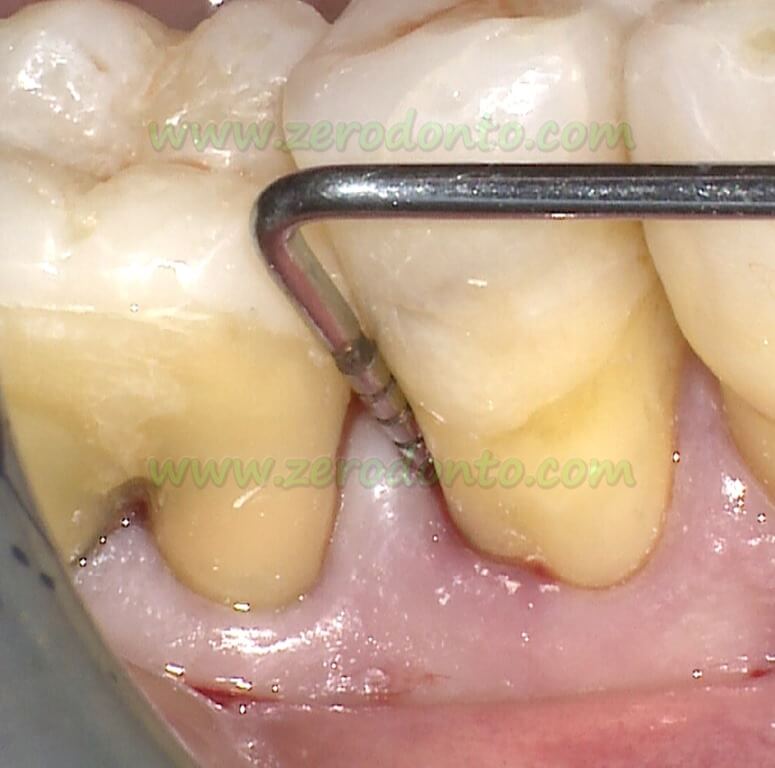 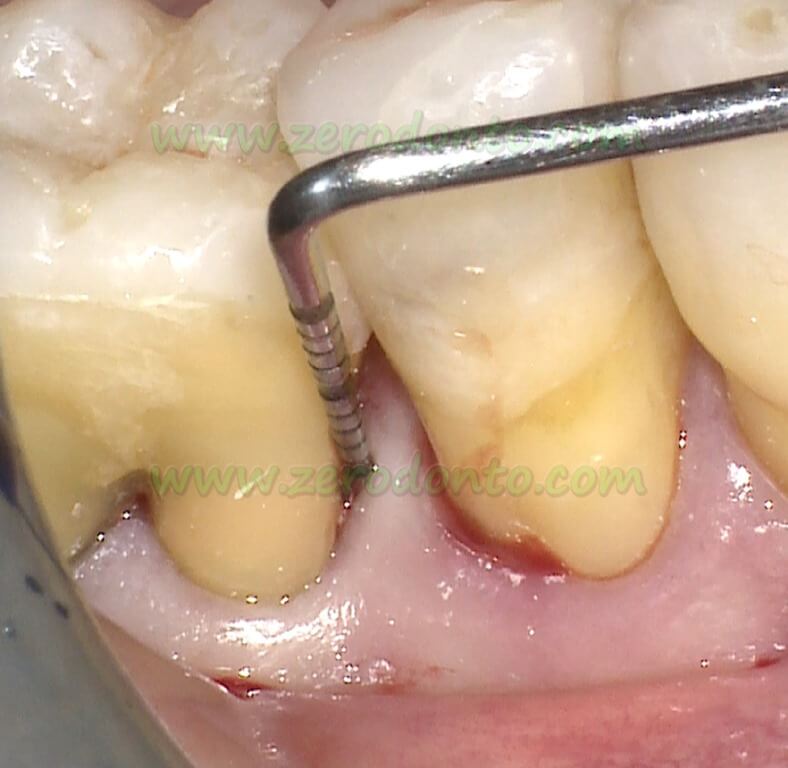 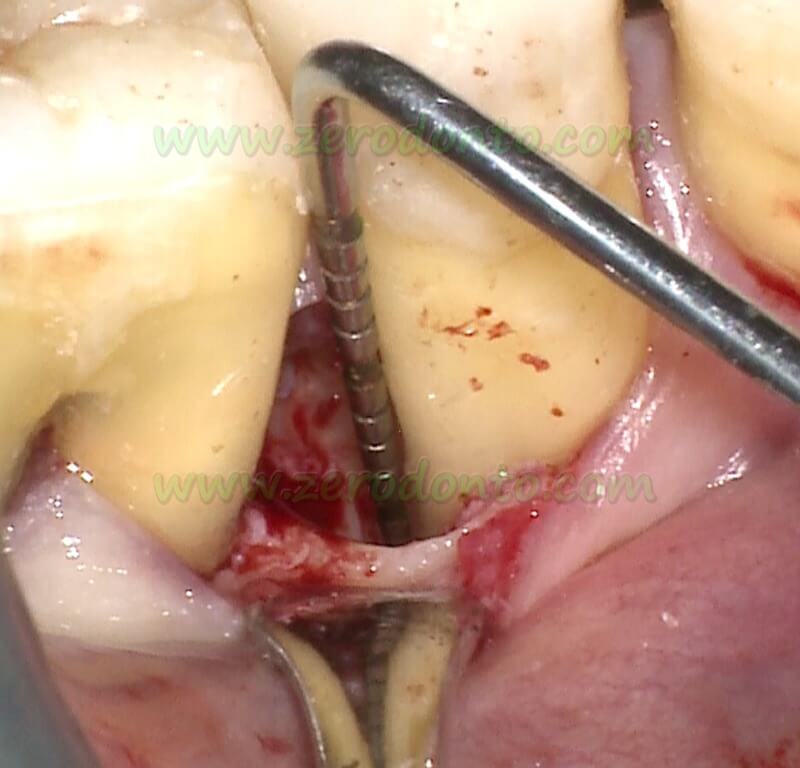 The diagnosis can be confirmed with a periapical radiograph that provides relevant information about the morphology of both the defect and the root. However, in many instances, the radiograph underestimates the real depth of the defect. 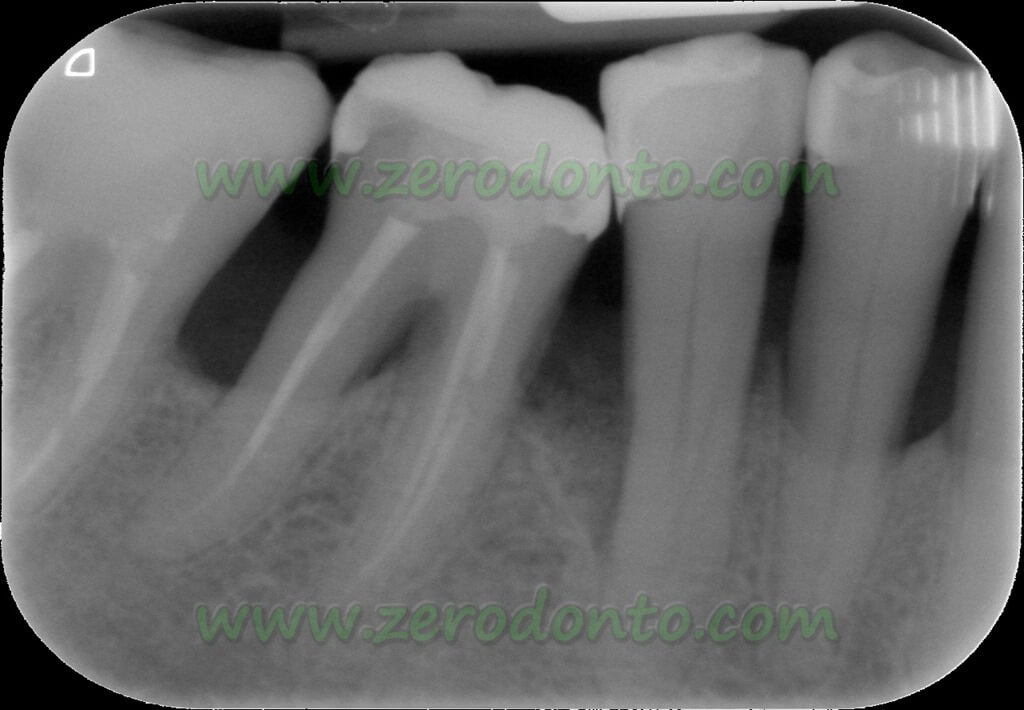 A critical prerequisite to periodontal regeneration is the control of periodontal disease. The patient should present with very low levels of plaque and inflammation as the result of a successful cause-related therapy. In addition the patient should not smoke or at least smoke less than 10 cigarettes per day. Systemic diseases, like diabetes, have to be under control. Intraoral prophylaxis with a low-speed rubber cup and prophylaxis paste should be performed immediately before surgery; in addition, the patient should rinse the mouth with 1% chlorexidine for 1 minute.

Local anesthesia with carbocaine and adrenaline 1:100.000 has to be injected in the mucosal tissues. Attention has to be paid not to infiltrate the gingival margin and, in particular, the defect-associated interdental papilla in order to avoid possible side effects in the early healing phase due to over-infiltration of these tissues.

The Minimally Invasive Surgical Technique (MIST, Cortellini and Tonetti 2007a, 2007b) is based on the elevation of very short buccal and lingual flaps that include the defect-associated interdental papilla; the papilla is dissected with two different approaches according to the width of the interdental space. In narrow interdental spaces a diagonal cut is selected, as described in the Simplified Papilla Preservation Flap (SPPF, Cortellini et al. 1999); conversely, a horizontal cut is performed in wide interdental spaces, according to the Modified Papilla Preservation Technique (MPPT, Cortellini et al. 1995a, 1995b). The buccal and the lingual intrasulcular incisions are restricted to the teeth neighbouring the defect; the buccal and lingual full thickness flaps are therefore elevated with minimal mesio-distal and corono-apical extensions, the aim being to expose the coronal edge of the residual bone crest. In most of the cases the reflection of the buccal flap does not involve the muco-gingival line. Scaling and root planing are performed by means of mini-curettes and sonic/ultrasonic instruments.

Once thoroughly cleaned, the defect can be treated with different regenerative materials, such as amelogenins, growth factors, autologous bone grafts, allograft materials or combinations thereof. The use of amelogenins should also include the application of EDTA for 2 minutes on the dried root surface; the root surface is then thoroughly washed and gently air-dried to apply amelogenins.

The MIST can be used also to treat multiple intrabony defects on adjacent teeth (Cortellini et al. 2008). The technique requires a larger mesio-distal extension of the flap to include all the defects-associated teeth. Although the mesio-distal extension is increased, the corono-apical elevation of the full thickness buccal flap is minimal, according to the previously reported principles.

More recently, a Modified Minimally Invasive Surgical Technique (M-MIST) has been proposed (Cortellini and Tonetti 2009). The overall idea of the M-MIST is to provide a very small interdental access to the defect only from the buccal side. The triangular buccal flap is minimally elevated in order to expose the residual buccal bone crest. According to the width of the interproximal space, the incision of the buccal aspect of the papilla follows the same principles described in the MIST approach. Once the buccal flap has been elevated, the supracrestal interdental tissue is dissected from the granulation tissue by means of a mini-blade. The interdental papilla is not detached from the residual interdental bone crest and supracrestal fibres, and the palatal flap is not elevated. The granulation tissue is further dissected from the bone with the mini-blade and then removed by means of mini-curettes. Then, the root surface is thoroughly scaled and planed by the combined action of mini-curettes and sonic/ultrasonic instruments. Special care has to be paid in order to avoid any trauma to the supracrestal fibres of the defect-associated papilla.

All the reported clinical steps are performed through the small buccal “surgical window” and require magnifying devices and optimal illumination of the surgical field, such as an operative microscope or magnifying lenses. The primary closure of the surgical wound is achieved using a modified internal mattress suture and eventually the application of additional passing sutures, as described for the MIST technique.

The two reported minimally invasive approaches can be used for the treatment of many intrabony defects but, obviously, present some limitations. Complex and wide defects involving 3 or 4 surfaces of a tooth and reaching the apical third of the root or even extending to the apex have to be approached with the elevation of large flaps, such as the Modified Papilla Preservation Technique (MPPT) or the Simplified Papilla Preservation Flap (SPPF, Cortellini et al. 1995, 1999). Conversely, defects involving one or two sides of a tooth can be approached using the minimally invasive techniques. The MIST (Cortellini and Tonetti 2007a, 2007b) allows for a direct buccal and lingual access to the intrabony defect, while the M-MIST (Cortellini and Tonetti 2009) limits the access to the defect through the small buccal flap. The main problems encountered applying a minimally invasive approach are limitations in visibility and management of the surgical field, which becomes even more critical in the M-MIST. The main problem with the M-MIST approach is the access to the root surface in cases presenting with a deep palatal extension of the defect not cleansable through the buccal window. (Cortellini and Tonetti 2009). In these cases, it is suggested to elevate the interdental papilla performing a MIST approach. The minimally invasive procedures take great advantage by the use of an operative microscope that allows an optimal adaptation of the magnifying factor on the basis of the surgical needs and is supplied with an illumination system coaxial with the lens, resulting in an ideal illumination of the operative area. 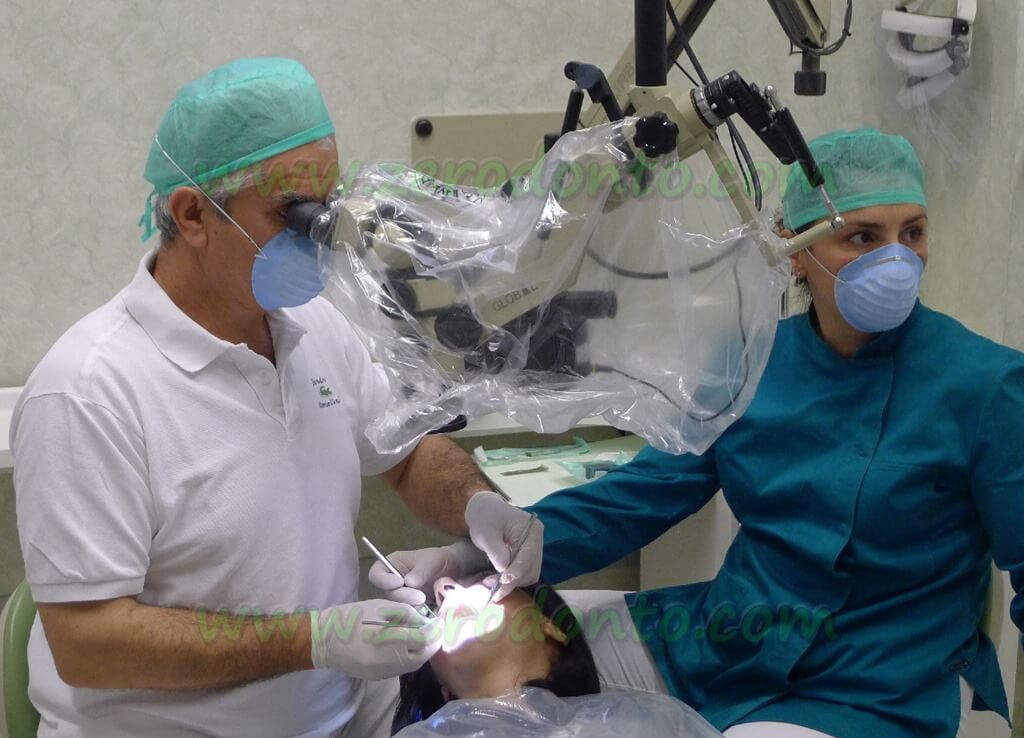 In addition, it is mandatory to implement the surgical tray with microsurgical instruments and materials, like tiny periosteal elevators, micro-pliers, micro-blades, mini-curettes, small scissors and needle holders. Small 6-0, 7-0 or even 8-0 non-resorbable sutures should also be adopted. 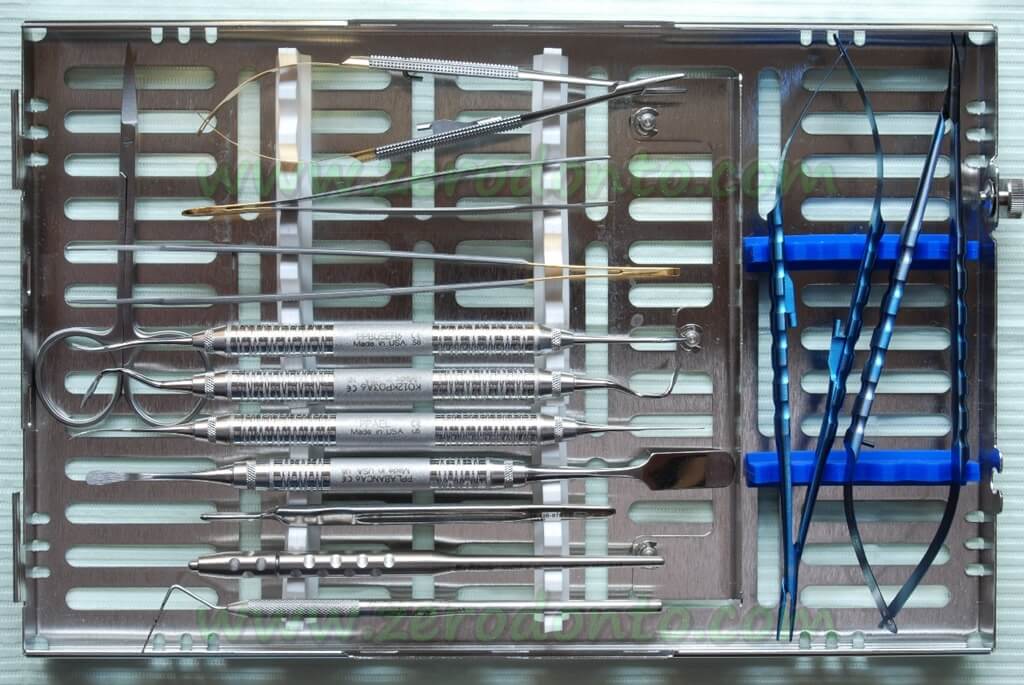 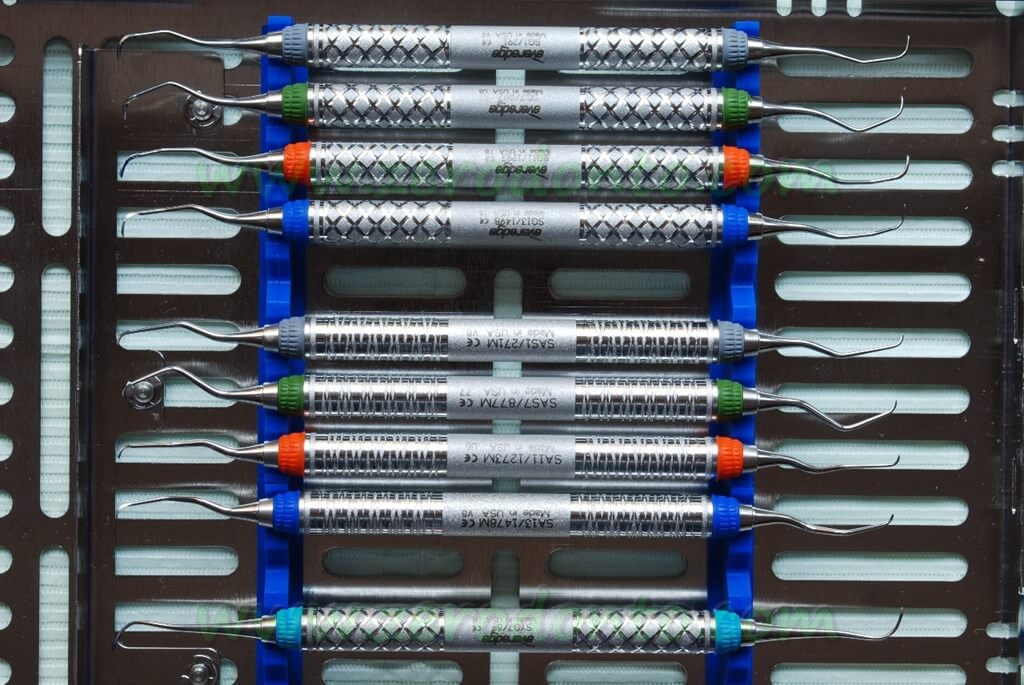 The patient is dismissed with the following prescriptions:

The clinical impact of the minimally invasive procedures on patients is reportedly extremely friendly. In a clinical study, none of the patients treated with MIST and EMD showed intraoperative pain or discomfort and only 30% of them reported some post-operative pain (Cortellini and Tonetti 2007b). The patients reporting pain described it as very moderate; pain disappeared within 26±17 hours, on average. Home consumption of painkillers was 1±2 tablets, on average; 23 patients did not take any painkiller.

In a further study on the MIST and EMD (Cortellini et al. 2008), 14 patients reported no post-operative pain while 6 patients referred a very light pain. In these patients, pain disappeared after 21±5 hours, on average. Home intake of painkillers was 0.9±1 tablets, on average; 9 patients did not take any painkiller.

In a study on M-MIST and EMD (Cortellini and Tonetti 2009), no patient reported intra- or post-operative pain; 3 patients referred a very slight discomfort in the first 2 days after surgery. Fourteen out of 15 subjects described the first postoperative week as uneventful, reporting that they had no feeling of having been surgically treated after the second post-operative day.

Minimally invasive surgery has to be considered a true reality in periodontal regenerative surgery. Several clinical trials have shown its efficacy and predictability in the treatment of intrabony defects. The clinical efficacy is consistently associated with a very low morbidity both during surgery and in the post-operative healing period. The minimally invasive surgical procedures require a specific training and the use of dedicated instruments and materials to be successfully applied to the treatment of intrabony defects.

Dr. Pierpaolo Cortellini received his MD from the University of Florence (Italy) in 1980, and his DDS in 1984 from the University of Siena (Italy). Dr Cortellini is the Secretery of the Accademia Toscana di Ricerca Odontostomatologica, Firenze Italy, and Board Member of the European Research Group in Periodontology, Berne (CH). He is active Member and Past President of the Italian Society of Periodontology and Past President of the European Federation of Periodontology. Promoter of “Project Periodontal Diagnosis” and Coordinator of the 5 “National Educational Projects” from SIdP, he was Scientific Chairman of Europerio 6. He runs a private practice in Florence (Italy), with services limited to periodontics. Dr. Cortellini is involved in clinical research in periodontology since 1982, with special emphasis to periodontal regeneration, aesthetics, and diagnosis. Dr. Cortellini lectures extensively on a national and international level; he is referee of scientific journals in the field of periodontology, and is the author of more than 100 original publications in scientific journals.
For info & Courses:

Pierpaolo Cortellini
Dr. Pierpaolo Cortellini received his MD from the University of Florence (Italy) in 1980, and his DDS in 1984 from the University of Siena (Italy). Dr Cortellini is the Secretery of the Accademia Toscana di Ricerca Odontostomatologica, Firenze Italy, and Board Member of the European Research Group in Periodontology, Berne (CH). He is active Member and Past President of the Italian Society of Periodontology and Past President of the European Federation of Periodontology. Promoter of “Project Periodontal Diagnosis” and Coordinator of the 5 “National Educational Projects” from SIdP, he was Scientific Chairman of Europerio 6. He runs a private practice in Florence (Italy), with services limited to periodontics. Dr. Cortellini is involved in clinical research in periodontology since 1982, with special emphasis to periodontal regeneration, aesthetics, and diagnosis. Dr. Cortellini lectures extensively on a national and international level; he is referee of scientific journals in the field of periodontology, and is the author of more than 100 original publications in scientific journals. info@ studiocortellini.it Website: www.studiocortellini.it TangramOdis srl Via C Botta 16 50136 Firenze, Italia corsi@tangramodis.it www.tangramodis.it ATRO (Accademia Toscana di Ricerca Odontostomatologica) Firenze, Italia ERGOPERIO (European Research Group on Periodontology) Berna, Svizzera 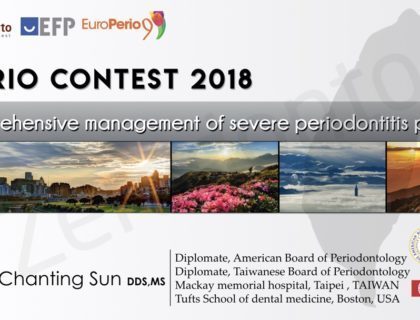 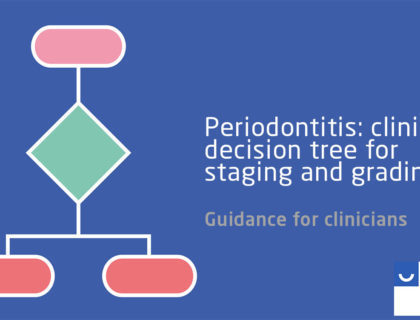