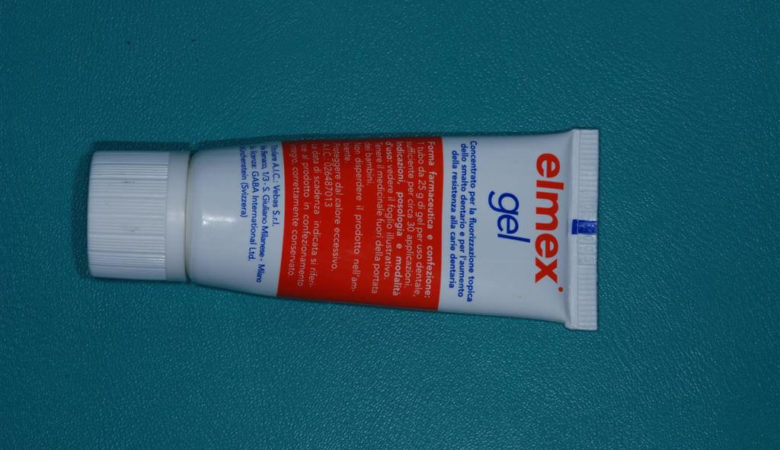 Dentine hypersensitivity represents a dental pathology of relevant clinical interest. It is characterized by pain, usually localized in one or more dental elements presenting a gap of the dentinal tissue, evoked by different stimuli (temperature, tactile, chemical and osmotic) which act in lack of other dental pathologies. Chronic traumas such as friction, abrasion, erosion acting on vital dental elements may remove the enamel or the cement that normally protect dentin causing gaps and consequently the direct contact between external intra-oral milieu and the pulp dental tissue (because of an anatomic variability, in some patients there cannot be a contact at a cervical level between the dental enamel and the cement). Pain can affect every dental element and any patient at any age although female patients age 20- 40 are typically affected (1, 2). Dentine hypersensitivity most frequently affects patients with periodontal diseases (3, 4), and can transitorily appear in patients under deep scaling, root planning, or periodontal surgery therapy (5) and patients undergoing teeth whitening or receiving conservative therapies (6). The role of the bacterial plaque in this disease is however controversial. The plaque accumulates on the radicular surfaces and its demineralizing effect on the dental structure can be associated to the opening of the orifices of the dentinal tubuli(7). According to some investigators patients maintaining a good plaque control have a low risk to develop a dentinal hyper sensitivity (8). On the contrary, many patients presenting gingival recessions together with plaque accumulation, have dental hyper sensitivity symptoms(9,10).

Definition: Brief but intense pain sensation caused by physical or chemical stimuli not induced by other dental pathologies (11).

Etiology: The association between dentinal tubuli and pain is based on the well known Brannstrom’s hydrodynamic theory. The application of a stimulus can cause a perturbation of the dentinal fluid contained in the tubuli (contraction, expansion, movement) which mechanically activates baroreceptors of the nerve endings of the dentinal pulp organ (A-D fibres) causing pain. The generation of the potential of action in the intra-dental nerve is responsible for the sense of pain (12, 13). In particular, temperature drop, loss of hydration caused by water jet, evaporation and application of an osmotic stimulus (sugar, acid, salt etc.) may cause the centrifugal movement of the tubular fluid. Therefore, it can activate the nerve endings more efficiently compared to other stimuli (tactile and temperature rise) inducing fluid movement towards the pulpe (14,15). A 75% of patients with dentine hyper sensitivity feel, in fact, pain when in contact with a thermic stimulus (cool) (16)

Initial lesion: the opening of the external end of dentinal tubuli appears when the smear layer or the intra-tubular substance are removed (17) mechanically (abrasion) or chemically (erosion). Acid erosion seems to be the main causal factor(18).

Lesions site: the cervical edge is affected in more than 90% of cases both on the vestibular and the lingual-palatal side (16). The loss of enamel and moreover, a gingival recession are fundamental elements in the etiology of the dental gap (18)).

Prevalence: The significant differences among the populations studied and the investigation methods used by different authors cause a large range of prevalence values (4-57%) (19, 20). The dental hyper sensitivity prevalence ranges from 60 to 98% in patients with a periodontal disease (3). The incidence top is at the end of the third life decade and decreases during the fourth and the fifth decade (1,2), The age dependent reduction of dentinal permeability and nerve sensibility, the secondary dentinal production, the extended use of toothpastes and mouthwashes containing fluorine can in fact occlude the exposed dental tubuli and reduce sensibility (21).

Distribution : superior premolar, first superior molar and superior and inferior incisives are the dental elements frequently involved in the dental hyper sensitivity phenomena (22,23). There seems to be a light predilection for the female sex (22,1,24).

Clinical diagnosis: the diagnosis may be defined following personal anamnesis collection, clinical and X-ray examination and after exclusion of other pathological conditions (see differential diagnosis). The typical temporary pain which appears after a stimulation of the dental element affected, can be provoked by the operator by using a dental drill or an air stream to register the patient’s personal answer to the disturb severity and to follow it up (11,27).

Symptoms: dentinal hyper sensitivity can be present as an uncomfortable and unpleasant sensation. The pain described by the patient can be defined as soft or intense, vague or specific, intermittent or constant (28).

· use of highly abrasive toothpastes

· defect in the development of enamel and dentin

Professional therapy: it is a more complex treatment indicated when hyper sensitivity affects one or more dental elements. The following are some substances contained in commercially available products to control dentinal hyper sensitivity:

· fluoride: sodium fluoride made toothpaste or concentrated solution and stannous fluoride in water solution or gel made by glycerin and carboxi-methyl-cellulose reduce the dentinal permeability in vitro (29) perhaps through precipitation of insoluble calcium fluoride on the dentinal surface promoting obliteration of exposed tubuli (7). 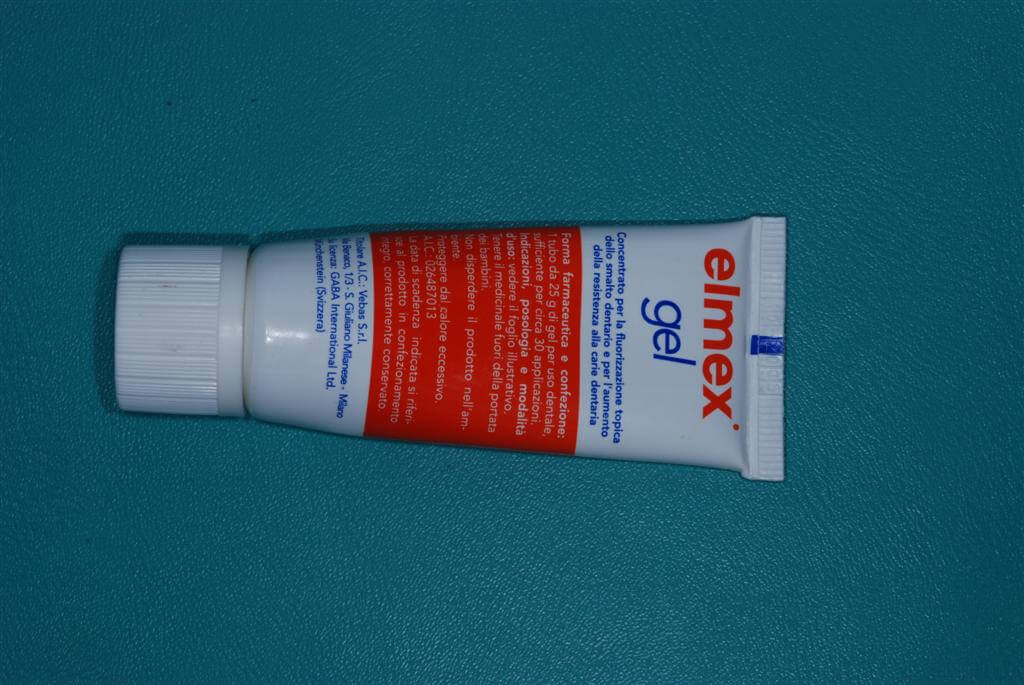 · potassium nitrate: potassium ions contained in toothpaste at 5% at low abrasivity or in

bi-adhesive gel at 5% and 10% thanks to their depolarizing effect reduce nerve excitability in animal models (30,31,32).

· oxalates: potassium oxalate at 3% and ferric oxalate at 6.8% reduce dentinal permeability and obliterate tubuli more efficiently in vitro (33,34) than in clinical practice (35).

· calcium phosphate: it occludes in vitro (36,37) dentinal tubuli and it reduces their permeability.

· calcium hydroxide: it occludes dentinal tubuli through a link among calcium ions and high protein free radicals and increases the mineralization level of the exposed dentin. It acts immediately but for a short time, therefore continuous applications are needed (38) and it can irritate the gingival edge (39).

· resin and adhesives: these materials can be used just in case of a specific and localized hyper sensitivity. Even though they act efficiently by a de-sensitization point of view, the risk of molecular broken and consequent exhibition of tubuli is high and represents a limit in the use of these composites (28).

· hydroxynanoapatite: it occludes dentinal tubuli thanks to its ability to create a non reabsorbed precipitate with high affinity for collagen fibrilles. (In our clinical practice the Twin Pro desensitization solution for professional use, seems to be very effective. It is constituted by a solution of soluble salts of potassium (green) which can inhibit the stimulation of nerve fibres through an extended release of potassium ions (chemical action mechanism) and of a solution of soluble salts of calcium and strontium (yellow) responsible for the mechanic occlusion of dentinal tubuli (physical action mechanism). 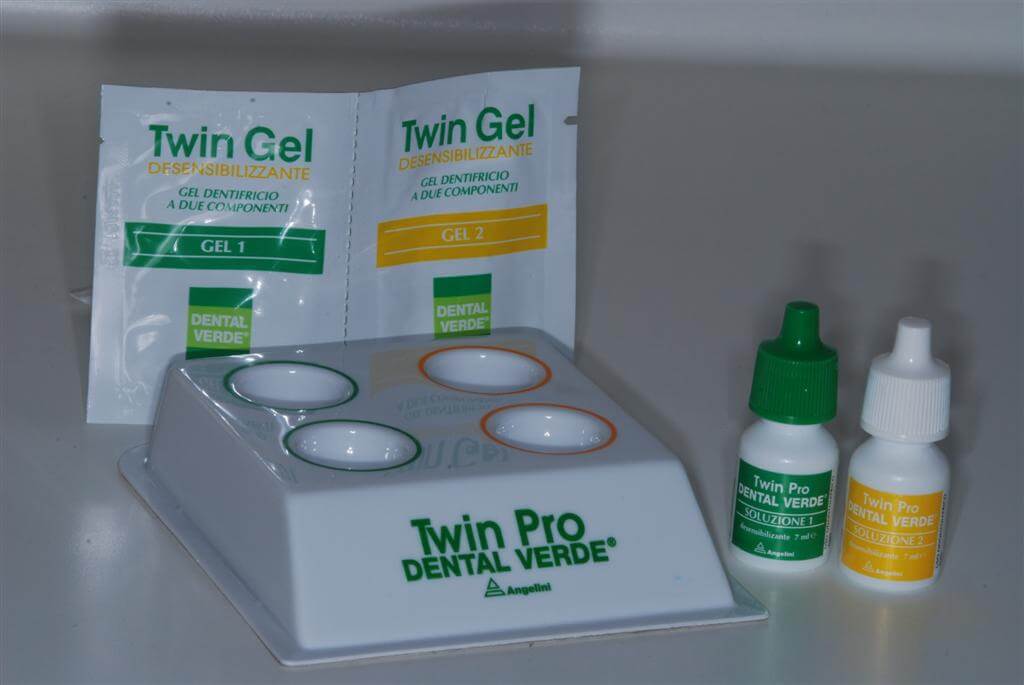 · ionophoresis together with fluorine administration: thanks to electric current flow which can facilitate the spread of fluoride ions in the tissues, this treatment causes an immediate reduction of the sensitivity. However symptoms appear again after 6 months (40).

·Laser use: Nd.YAG laser irradiation together with the giving of enamels containing fluorine of sodium demonstrate are able to occlude more than 90% of dentinal tubuli (41) such as CO2 laser combined therapy- application of stannous fluorine gel is efficacious in closing the tubuli for a period of about 6 months (42,43)

Home therapy: it is simple, cheap and indicated for treatment of a spread hyper sensitivity. Commercial products used are toothpastes and mouthwashes containing one or more desensitization agents.

· Potassium salts: toothpastes containing potassium nitrate at 5% or potassium clorure at 3,75% are efficacious in the desensitization therapy (44,45)

· Potassium salts and fluorine: toothpastes containing potassium nitrate at 5% and stannous fluoride at 0,45% spread by a paste containing silicium (44,46) guarantees a reduction of dentinal hypersensitivity and also shows in an in vitro research a low hydro conductance and provides a high flow of potassium ions in the dentinal tissue (47). 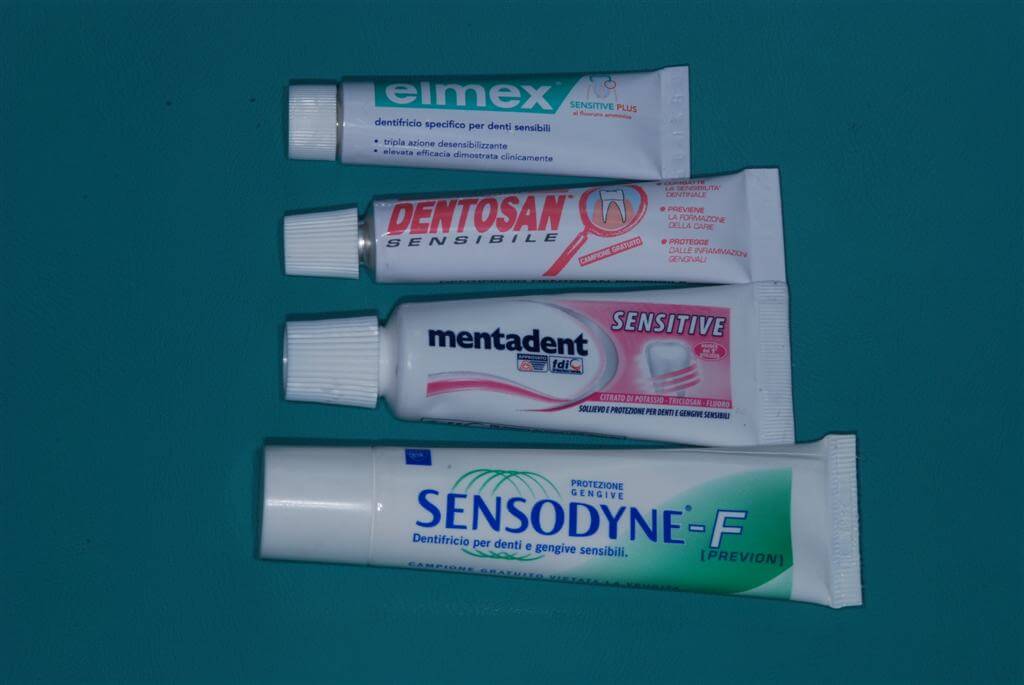 Role of eccipients: some materials are critical for the determination of how the presence of other substances as sodium monofluoridephosphate, sodium fluoride, tin fluoride and anti plaque agents can compromise the desensitization action of the above mentioned formulations. Some studies on the addition of triclosan anti plaque agents and zinc citrate showed that these materials do not interfere with the efficiency of products containing potassium salts (nitrate and potassium citrate) (45,48).

Prevention: A very important aspect, frequently undervalued by a lot of dentists is the one concerning preventive measures. A valid treatment plan should include the identification and elimination of causal factors such as the assumption of acid substances of external origin by the patient or the presence of internal acids which are in contact with the oral cavity and the brushing trauma. The role of erosive agents in the appearance of the dentinal hyper sensitivity is well known and documented (26,18). External sources of acids (fruit, fruit juice, yogurt, cola, wine) and internal ones (gastric reflux and regurgitation) can cause enamel lesions(erosion), detach the smear layer and open dentinal tubuli. The damage of the dentinal tissue is harder when we associate acid substances to the use of tooth pastes with a high abrasion index (18). The most appropriate recommendations for the patient is not to brush his teeth in the 2 or 3 hours after eating or drinking acid drinks to avoid the damaging erosion and acid-abrasion effect. 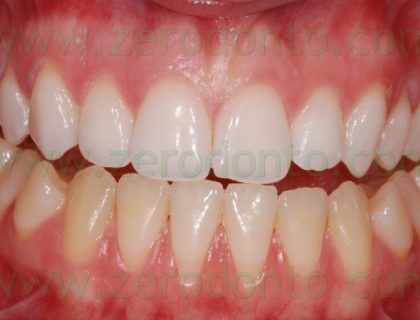